Wolfgang Gerbig from the Bielefeld Chapter, Germany, relives every kilometre of their memorable American adventure in 2006.

Was it the never-ending wide open spaces, the brash, exciting confusion of bright lights in Las Vegas or the resonant rumble of the Harley engines on the legendary Route 66 that impressed us the most? Every one of us brought home a different lasting impression. But it is also everything combined that made our 11-day, 3,307km journey in western USA so unforgettable.

It was Peter and Klaus that conceived the idea. They researched and planned the journey and brought together a group who were in search of an American adventure.

We flew from Schiphol, Amsterdam to Washington and then on to Los Angeles where we would spend the first, second and last nights of the tour. 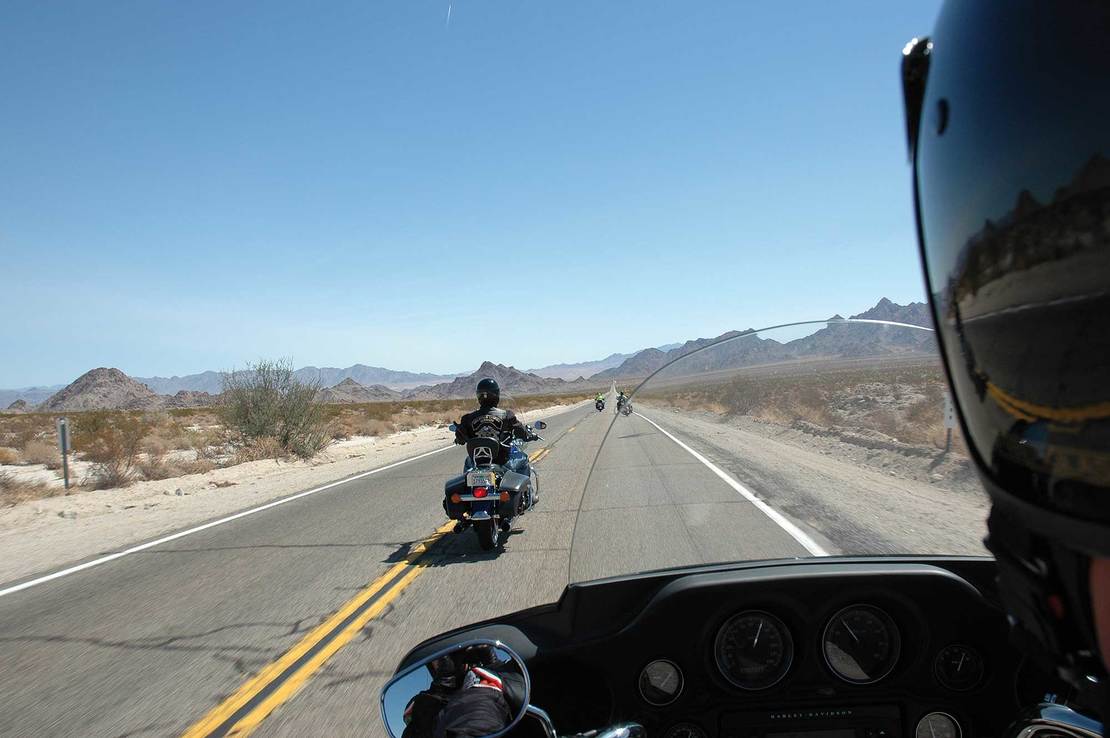 We began our trip with a five-hour tour of LA. A few of us also took the opportunity to visit the Harley dealer in LA while some others decided to take a walk along the beach from Venice Beach to Santa Monica. We rented our Harleys and a mobile home for Theo and Andi, who kindly transported our luggage, was arranged.

On our third day in the US, we set off, travelling south on Interstate 405 for 206km to San Diego. The Mexican border was close by. After crossing two seemingly endless bridges we arrived in dense traffic in Long Beach to admire the Queen Mary, which is now used as a hotel. Also worth a visit was the Coronado Peninsula across the Coronado Bridge and past the Hotel Coronado. 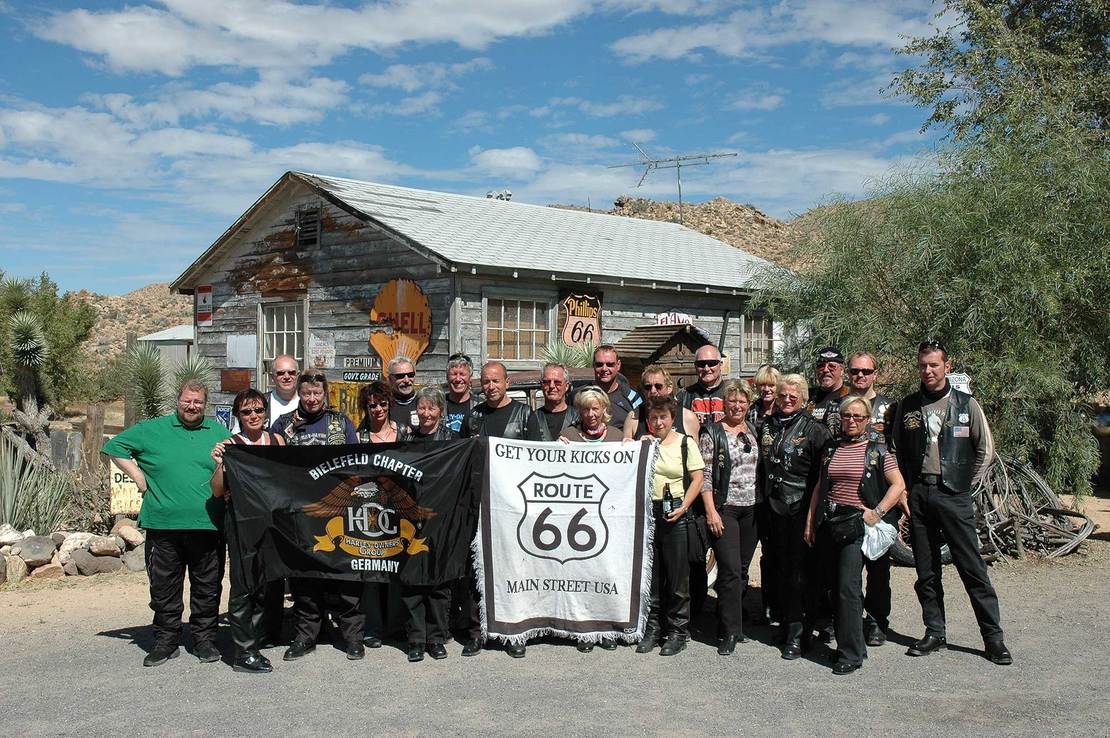 The following day we passed through small towns such as Anza and Julian and Santa Ysabel as we headed on our 296km journey towards Palm Springs. A fresh breeze forced us to put on warmer clothes and a wonderful mountain landscape awaited us, with probably the most beautiful viewpoints on this route of the Palm Springs valley.

The fifth day promised many highlights, and it kept that promise. Our destination was the Joshua Tree National Park and Laughlin, but first we travelled via Yucca Valley and Twentynine Palms heading towards Lake Havasu. An admission fee was payable at the entrance to the Joshua Tree Park, but it was worth it. This park forms part of the desert landscape between the Mojave and the Colorado deserts. Joshua trees are a type of palm lily. We admired the fascinating geological rock formations. They stood there like giants, bright yellow and bare. 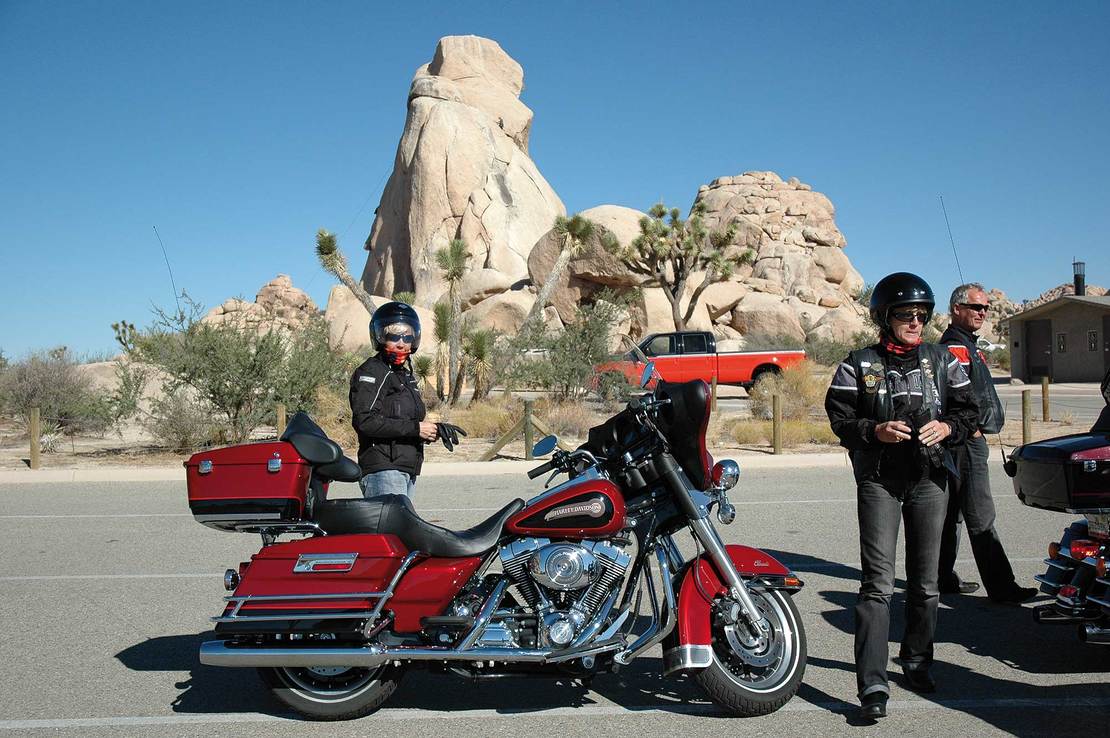 After leaving Golden Shores/Oatman we rode for the first time on historic Route 66 – the Mother Road – the dream road of all bikers. It was a fantastic feeling. We stopped for a break in the old gold-miners’ town of Oatman. One shop after another, packed with souvenirs we couldn’t resist. Later we arrived at our destination, the town of Laughlin. The large Flamingo Hotel was situated right on the Colorado River. It was not difficult to tell that we were now in southern Nevada, merely by the number of casinos. We were therefore able to try our luck as this town has the third largest number of casinos after Las Vegas and Reno. We had covered a remarkable 506km.

The route on the sixth day, which was to cover more than 573km, led us across the Colorado River in the direction of Kingman/Arizona in Mojave County. We took Interstate 40 to Williams, as we wanted to see the Grand Canyon that same day. In Tusayan – where the interesting South Rim Visitor Center is also located – we arranged for some of us to fly over the Grand Canyon while the others visited the IMAX cinema.

The Grand Canyon is spectacular. We had been so impressed by what we had seen that we didn’t want to leave. We therefore made another big loop in the late afternoon. It was nice to be riding in the evening, although, as the last rays of the sun turned the mountain tops red, the temperature plummeted! That night we stayed at the Grand Canyon Boulevard in Williams. There, the mobile home awaited us half-frozen bikers with a wonderfully warming Jack Daniels. 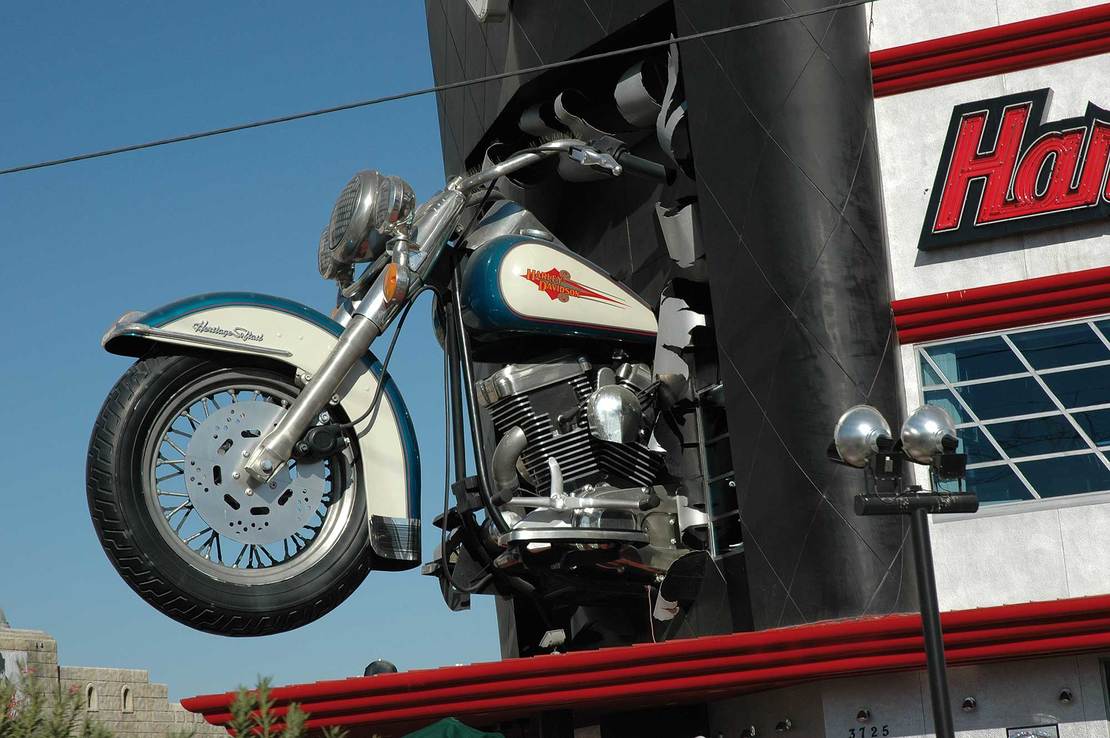 On the next day we took the nostalgic Route 66 to Seligman, along the bestpreserved stretch of the road. Established as a layover stop for the Santa Fe Railroad in 1886, the town currently has 1,000 residents. Prominently displayed at the entrance to the town is a sign stating ‘Birthplace of Route 66’, an attribute for which the town has barber Angel Delgadillo to thank.

We continued our journey on Highway 93 to the Hoover Dam on the Colorado River, which forms the border between Arizona and Nevada. We admired the 14m-thick dam walls (200m thick at the bottom) and realised we had only travelled 50km (out of a total of 407km) on the way to Las Vegas.

We took East Lake Mead Drive and entered Nevada’s biggest city on the I-15. The closer we got to our hotel, the more glittery the massive displays and hotel advertisements became. Millions of gambling-mad tourists are attracted to this city. It was certainly not so easy concentrating on the traffic where everything was designed to distract. We made a night-time excursion along the strip. Some of us couldn’t suppress the urge to try our luck in the gambling halls. The Rio Hotel next door also contained a mega-sized Harley shop.

On the eighth day some of the group stayed in Las Vegas while the rest of us took a trip into the Valley of Fire. We travelled north about 50km, and it was worth the effort, with spectacular lava formations and weathered red sandstone rocks. We couldn’t get enough of the views, the light and the colours. 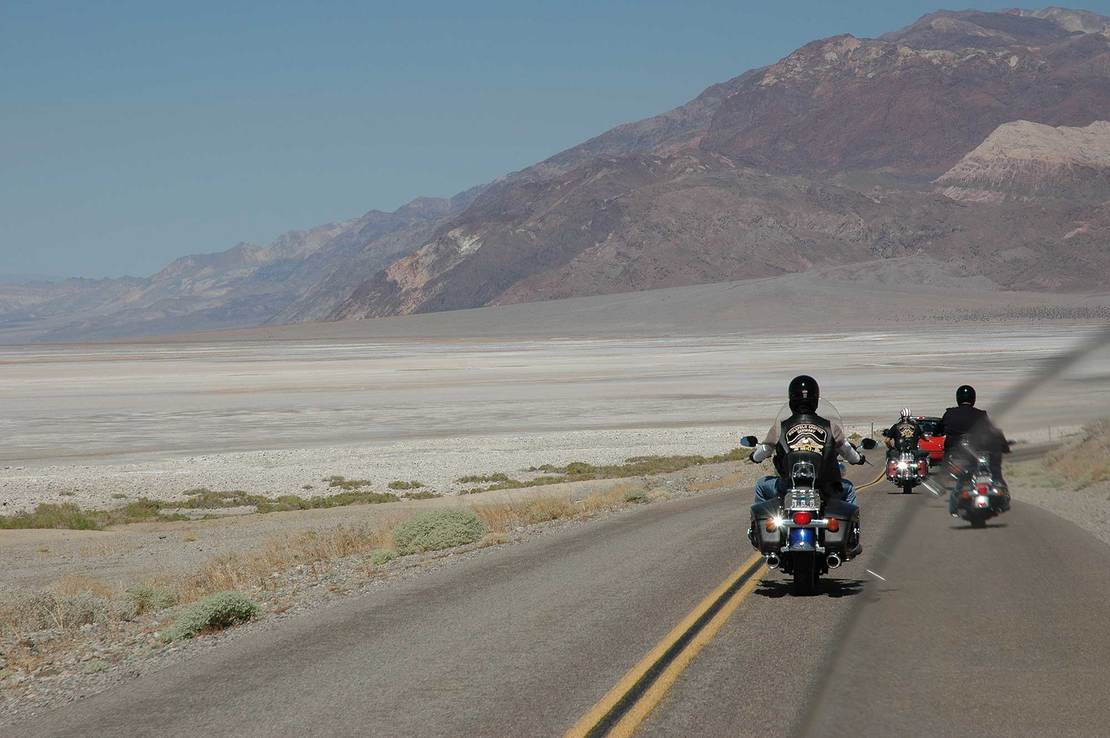 On the ninth day we left Las Vegas in the direction of Death Valley, first passing through Pahrump and Shoshone to Ashford Mill. The region became ghostly and desolate as we were in the driest national park in the USA. Hardly any vegetation and no hard shoulder, that’s what it was like when we arrived at Badwater (85.5m below sea level). In the flat salt pan, six-sided structures are formed by the drying of crystals. Temperatures as high as 56.7°C have been recorded there. While our journey through the valley was hot, it was not unbearable. We made a stop at the visitor centre and at Zabriskie Point, which has bizarre erosion landscapes, formations of sediments from the former Lake Zabriskie which dried up nine million years ago. We rode past Stovepipe Wells, giant well formations of sand sculpted by the wind and booked an overnight stay at the eponymous Stovepipe Wells resort. Yes, folks, and this was the point when it happened: all discipline went overboard, the exertion of the last few days was shaken off and we really partied that evening.

The next day we headed through another part of Death Valley, past Orlancha towards Lake Isabella, a very beautiful lake with fantastic outlook points. We made a stop at the small town of Kernville, a friendly little place with shops with carved Indians and an oversized brown bear standing in front of them. After refreshments we travelled along the picturesque Kernville River to Bakersfield and beyond on Highway 99, to Interstate 5 and onward to our destination, the Best Western Liberty Inn near Lebec.

The final day would take us back to Los Angeles. We rode via Ventura south-west to Oxnard. From there we turned on to Highway No. 1 and admired the beautiful surf beaches on the Pacific coast. We stopped at one of the most renowned biker hangouts – Neptune’s Net – for some seafood. We followed the Pacific Coast Highway and reached Malibu, a residential area preferred by film stars and starlets.

We then visited the ‘Rockstore’ in the mountains – another insider tip. The Rockstore had a wall covered with photos of celebrities. Apparently all the famous great names have been there and the old filling station in front of the store served as the set for all the pictures.

Because of devastating forest fires, we had to change our route. We reached our final destination, Los Angeles, via Santa Monica – which is worth a visit. On the last day we covered about 325km. We returned the mobile home and the bikes and returned to the Hacienda Hotel. We knew it very well. The return flight to Amsterdam was via Chicago and we spent most of the flight recounting the fantastic memories of this trip, knowing that this would certainly not be our last trip to the USA together.