You’re at a rally, and there are bikes everywhere. You pull into a big parking lot and assess the situation. Riders have been coming and going all day, and the rows have gotten a little … “irregular.” Bikes are popping out of nowhere, and it’s hard to know where to ride. You see a path forward, but it’s tight. And crooked. And a little bit scary.

You start to ride through, but in a moment both your feet are on the ground and you’re pushing slowly ahead. The guy behind you is getting impatient. He hasn’t honked (yet), but you can feel his gaze and sense his frustration. And you start to wish you’d never pulled in here.

That’s a little how Albany, Louisiana H.O.G. member Wes Smith used to feel – before he learned the art of riding slowly in a confined area. Now he’s not just fearless, he’s a champion: the winner of the Riding Skills Competition (Civilian Division) at the Harley-Davidson 115th Anniversary Celebration in Milwaukee last year.

“I never could do the slow manoeuvres,” he recalls.

But then one day he saw a bunch of police officers riding through cones in a sporting goods store parking lot. It was a police skills riding competition. He was fascinated, and he was hooked. Next thing he knew he was taking a class with the Gulf Coast Motorcycle Institute. Now he’s a champ – and not afraid of parking lots anymore.

“The difference in my riding is like night and day,” he says. “And with training and practice, anyone can learn to do it.” 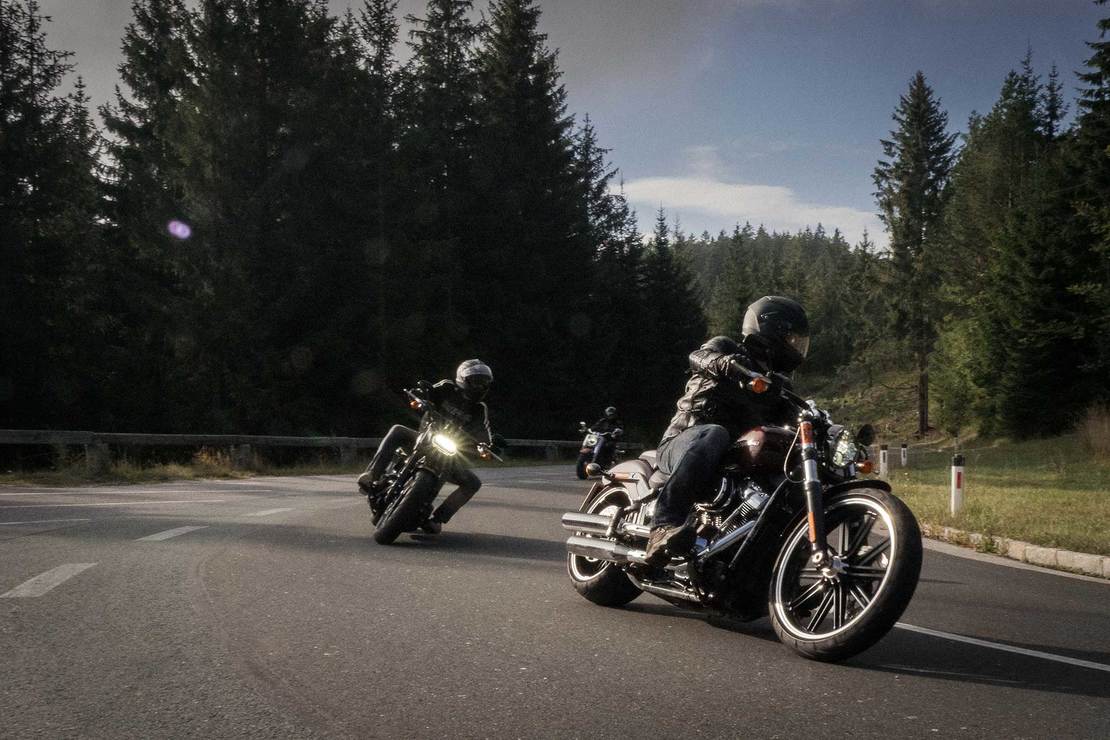 STEPS FOR SUCCESS
Ray Petry, a Harley-Davidson® Rider Development project manager and Certified Riding Academy Coach, outlines a multi-step approach to manoeuvring slowly in tight spaces. It starts with riding slowly in a straight line; then learning to balance the clutch, throttle, and rear brake; finding “full lock” turning the handlebar; and finally leaning the bike into the turn while shifting your weight to the outside.

Straight and Steady
Start by riding slowly in a straight line, with your head and eyes looking forward (not down at your front tire). “Don’t look down or to your left or right too much,” Petry says, “because you’re going to destabilise your head and that’s going to disrupt what you’re trying to do.”

Practice keeping a steady throttle while feathering the clutch and rear brake to keep moving forward at a slow, steady pace. A light touch on the rear brake is key, Smith says. “I use just my big toe to mash the rear brake. I just barely touch that sucker.”

Once you become proficient at riding slowly in a straight line, without having to “row” on the handlebars or put your feet down, then you’re ready to start turning. 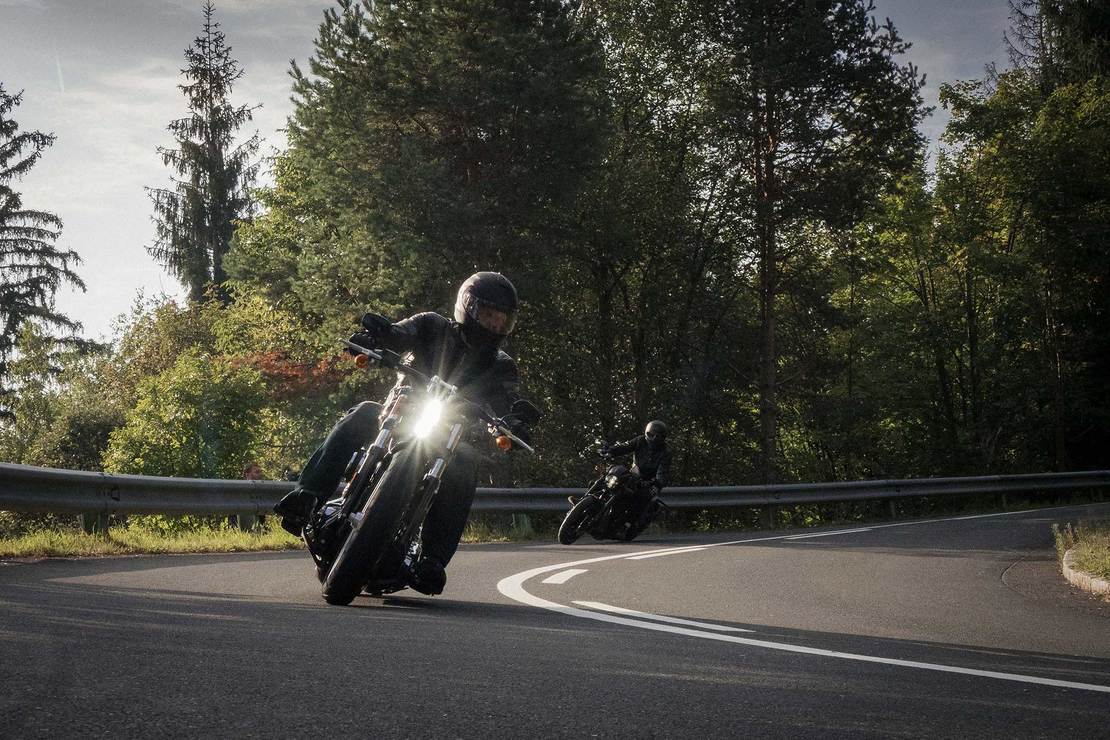 Ready, Set, Lock
The next step is riding slowly while turning the bike with the handlebars in the “full lock” position – that is, turned to the left or right as far as the bars will go. If you’re familiar with the concept of “countersteering” (turning the bars in the opposite direction to initiate a turn), remember that it doesn’t apply when you’re traveling below 5-7 mph.

“In this case, it’s direct steering,” Petry says, “So you’re actually going to turn the handlebars in the direction you want to go, just as you would a steering wheel on a car.”

The point of this exercise is to get a feel for how far the handlebars will turn, and what the limits are in that regard. Maintain a steady speed. If you feel like the bike is going to tip, release the rear brake, ride out of it, and start over.

A Human Counterweight
Finally, to decrease your turning radius as much as possible, you’ll have to lean the bike as far as you can. That requires using your body as a “counterweight,” through the turn.

At higher speeds, your body will naturally lean into the turn with the bike. If you’re doing it properly, your torso will essentially stay in line with the frame of the bike. It happens by itself and you don’t have to think about it too much. At low speeds, the leaning is more deliberate.

“Turning the handlebar all the way to one side will result in a smaller turning radius, but the smallest one is when you lean the motorcycle all the way over as well,” Petry says. “If you’ve ever seen a motor officer do this, you’ll see that the motorcycle’s leaned over until the footboard skims the ground, but the rider is leaned away.”

For smaller riders, effective counterweighting might require shifting your weight on the seat, moving your butt around a little bit. For most people, however, it may only require keeping your body vertical (to the ground) as the bike moves back and forth beneath you through the turns. This is how Smith approaches those tight turns in competition.

“I don’t move a bit,” he says. “I get myself positioned, and then I don’t want to move around. You want to keep your body set straight up, like a 2x4 almost, and then let the bike work under you.” 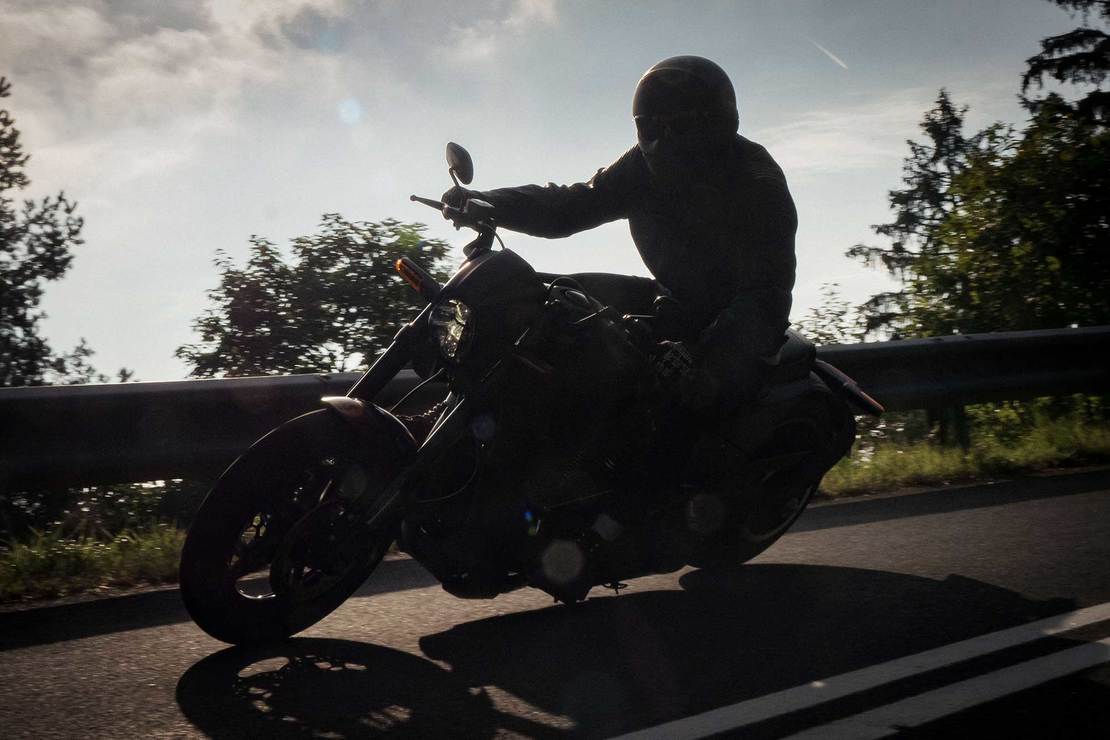 PRIVATE PRACTICING
Taking a course is the best way to learn these skills and become a better rider in close quarters. But whether you take a class or teach yourself, diligent practice is the real key to improving.

An empty parking lot is ideal. If you learn the width of the parking spaces you don’t even have to set up any cones. Most spaces are eight or nine feet wide, so two together make a good target width for a tight U-turn.

And because it can be both mentally and physically draining, it’s best to practice in short stretches, maybe 20 minutes at a time, Petry says. And take little breaks now and then, both to let your bike cool down and to relax your body. Shake out your hands. Take a few deep breaths. Let your pulse get closer to normal.

EVERYTHING IN ITS PLACE
Finally, remember that this type of riding is for specific real-world situations. Don’t make a u-turn in the street just because you can – or because you see a police officer do it. That can be dangerous.

“These skills are really for navigating congestion off-street,” Petry says. “When you get to a rally and the street’s closed, and there are a lot of moving motorcycles, or you’re riding into a crowded gas station. Any time you’re leaving the public roadway but still having to ride in a very congested and complex situation, that’s where it’s really helpful.”

The Drop Zone
If you’re serious about learning to ride slow, you have to be prepared to drop your bike a few times. “You have to know how far is ‘too far,’ and you can’t learn that without dropping your bike,” Petry says.

“But it can be a big mental obstacle to overcome,” he adds. “If you’ve got a Touring bike and it’s got the front and the rear guards on it, you should be less concerned. But still, those guards are not inexpensive. So you should wrap them up with something to protect them.”

It’s also important to learn to pick up your motorcycle safely. By learning the proper technique, almost any rider can safely lift almost any motorcycle.