6O Years of the Sportster

The Harley-Davidson® Sportster® motorcycle has seen many changes over the years, but as it reaches its 60th anniversary it still delivers a powerful punch that lives up to its legacy

By 1954, Harley-Davidson® no longer had to worry about domestic competitors. Indian Motorcycles of Massachusetts closed one year earlier. For the first time in its history, Harley-Davidson stood as the sole American motorcycle manufacturer. However, that didn’t translate to less competition.

The postwar years saw more open trade between the and other countries, which led to more foreign-built products, including motorcycles made in the and . Norton, Triumph, BSA and others were making inroads to the American market. In many cases, their bikes were smaller, lighter and cheaper than Harley-Davidson’s traditional offerings.

In fact, Harley-Davidson was already well on its way to adapting to the new environment with the single-cylinder lightweights beginning in 1948. War reparations allowed it to produce 125cc and other singles based on popular German motorcycles of the 1930s.

But the British invasion posed a big threat. Sporty bikes were selling well in the , leading Harley-Davidson to respond with the K model in 1952 and KH version one year later. Elvis Presley bought one (now in the Harley-Davidson Museum™), and they were the basis for the KR racer, one of the most successful dirt track racing bikes ever. The K models introduced swingarm rear suspension and foot shifters to the Harley-Davidson lineup, but even for their time they were considered underpowered compared to their European competition. 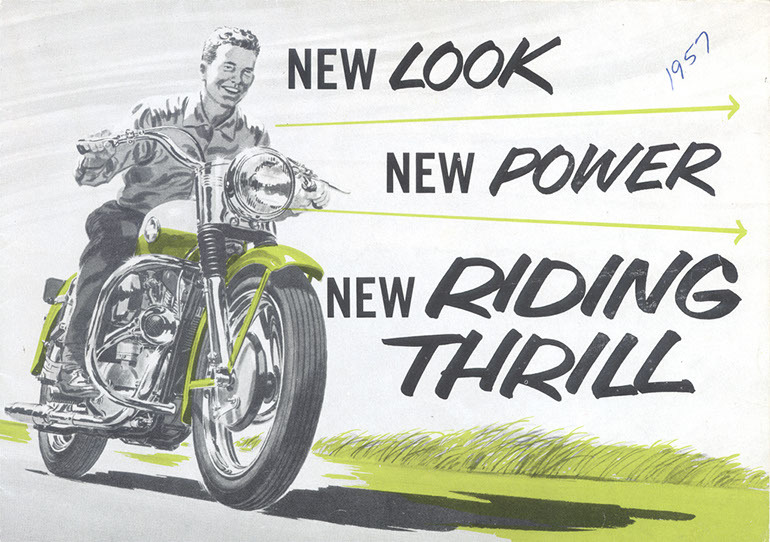 For the 1957 model year, Harley-Davidson announced the XL Sportster® bike. It was based on the K model, but offered increased displacement and replaced the K’s side-valve cylinder heads with more efficient overhead valves. Its iron cylinder heads inspired the engine’s ‘Ironhead’ nickname.

The Sportster model was well reviewed and sold better than the previous KH models. Even before the end of 1957, the gruelling Jack Pine Enduro was won on a Sportster bike (with knobby tyres, of course). Custom builders set to work immediately. A photo submitted to Cycle magazine showed a Sportster from the ‘ school of chopping’. The Sportster motorcycle had arrived.

Just one year later, the line grew to two models with the XLCH, equipped with a higher compression ratio and race-proven magneto ignition. Riders of TT races and scrambles flocked to the high-performance ‘CH’ model. The XLCH also introduced the 1948 model S fuel tank to the Sportster bikes. In the years to come, the ‘peanut tank’ would become a term common to customisers and enthusiasts of Ironhead Sportster models. The CH’s bobbed rear fender made a triumphant comeback in the 2010s with the Iron 883™ and Forty-Eight® models. Electric start was added to the Sportster for the 1967 model year, along with the promise of ‘Electrifying Fun!’

The late 1960s and early ’70s saw a rise in motorcycle drag racing. Bikes built by private builders gained legendary status, such as the ‘Super Sportster’ and drag racer Leo Payne’s ‘Turnip Eater’. But the pinnacle of Sportster motorcycle performance was the cigar-shaped, 16-foot Streamliner ridden by racing great Cal Rayborn at in 1970. With only one Sportster engine and plenty of tuning, the motorcycle achieved an average speed of just over 265mph, breaking the world record.

The Sportster model also served as a dirt track racing platform. The first was the XLR, which saw most of its action in TT races, while the side-valve KR soldiered on at the oval flat tracks. But when a new dirt tracker was needed, the Sportster motorcycle lent its powertrain design to the new XR-750 for the 1970 season. Within two years, the XR-750 was logging not only victories but also the first of a record number of Grand National Championship season titles. The number of victories and championships won by H-D racers on XR-750 bikes may never be topped.

Sportster motorcycles got even more limelight with the NBC television series Then Came Bronson. Disillusioned journalist Jim Bronson, played by Michael Parks, took to the highways of on a 1969 XLH model to find the meaning of life. The series only lasted for one season, but the iconic bike is still revered by motorcycle fans today. 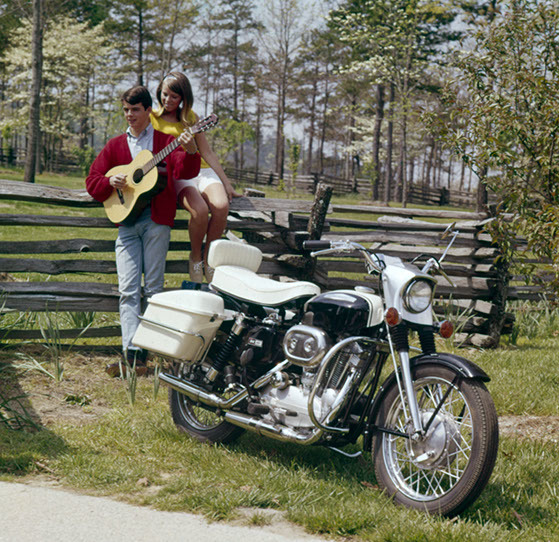 The most significant departures to date for the XL family came in 1977. One was the short-lived XLT Touring Sportster model, complete with saddlebags and windshield. The other bike was the XLCR Café Racer. Not merely a nod to the 1960s British café bikes, the XLCR was a radical, reimagined Sportster motorcycle. The rear fender was straight from the XR-750 model, and the new frame was also race-inspired. Other changes were the sportier handlebar, a first for any XL, as well as the seven-spoke cast wheels and blacked-out exhaust. The XLCR model continues to inspire into the present, including the 2017 Low Rider® S and XL1200CX Roadster™ models.

The track success of the XR-750 model inspired the development of the 1983 XR-1000, a street motorcycle with a 1000cc version of the original XR racing mill. But the biggest upgrade of the 1980s came with the Sportster Evolution® engine. Like its Big Twin predecessor, the new engine kept the architectural elements of the 1957 to 1985 Ironhead but was a significant step forward with its improved oil circulation, ease of maintenance and electronic ignition, among many improvements.

Other landmarks came in the 30th Anniversary Sportster model (1987), the release of the first ‘Hugger’ Sportster bike, as well as 1200cc displacements (1988), the introduction of five-speed transmission and belt drive (1991), and the first 1200 Sport and 1200 Custom Sportster models (1996). The 883R arrived for the 2002 model year, paying homage to Harley-Davidson’s venerable racing history with styling elements taken from the XR-750 bikes. As the Motor Company expanded in the 1990s, an all-new factory in , took over production of Sportster models.

The 2004 model year brought more big changes. The 883C and 1200C received an all-new 4.5-gallon fuel tank and other styling appointments. Both 1200cc bikes received performance cams and high-flow heads to increase horsepower, along with wider rear tyres. For better comfort, all 2004 Sportster models received rubber engine isolation mounts. New brake systems and lower seat heights, among many other features, were included on the 2004 Sportster motorcycles.

Upon their arrival, the Nightster® (2008), Iron 883™ (2010), and Forty-Eight® (2011) models revived both classic Sportster styling along with chopper and bobber cues from the past. True to honouring history, the name ‘Forty-Eight’ was a tip of the hat to the original peanut tank of the 1948 S model. The 2008 model year also brought the all-new XR1200, possibly the most radical Sportster bike built to date. With its inverted front forks, aluminium rear swingarm and an engine bumped up to 90 horsepower, the bike was engineered for performance just as the XR1000 and the Café Racer models were in their time. 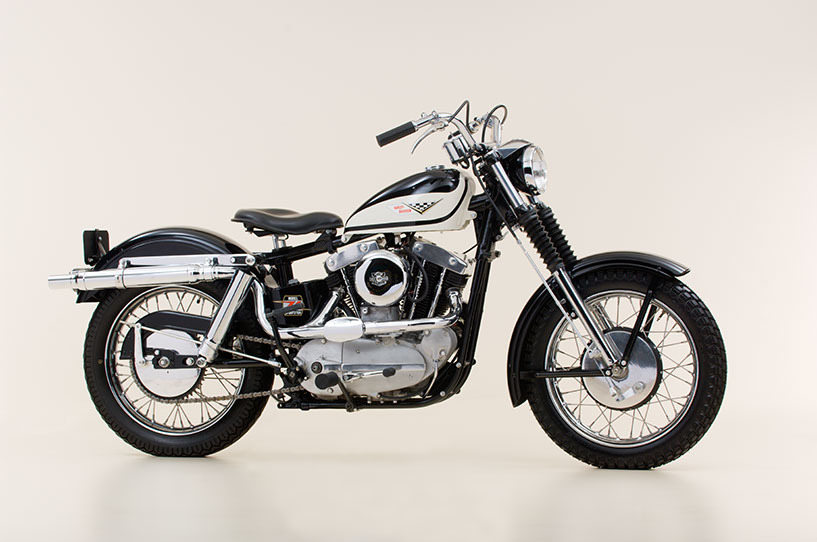 The 2017 model year marks the 60th anniversary of the Sportster motorcycle, making it one of the longest-living nameplates in automotive history. The model has seen many changes along the way, but it still delivers a powerful and stylish punch that lives up to its legacy.