Vicki Green has gone from horseback to Road Captain in just four years and in the process has made a mark, both on her bike and in her community

Vicki Green has been in love with horse power, of one kind or another, since she was four. Her passion for horses began when she was growing up in Hong Kong, with her English dad and Chinese mum, and continued when she moved to the at the age of 18 to study psychology and neuroscience at the .

At the same time, she was taking her first steps on the road to becoming a Harley® rider through her husband, Matt. Vicki says: “A family friend of ours had an accident and was no longer able to ride. 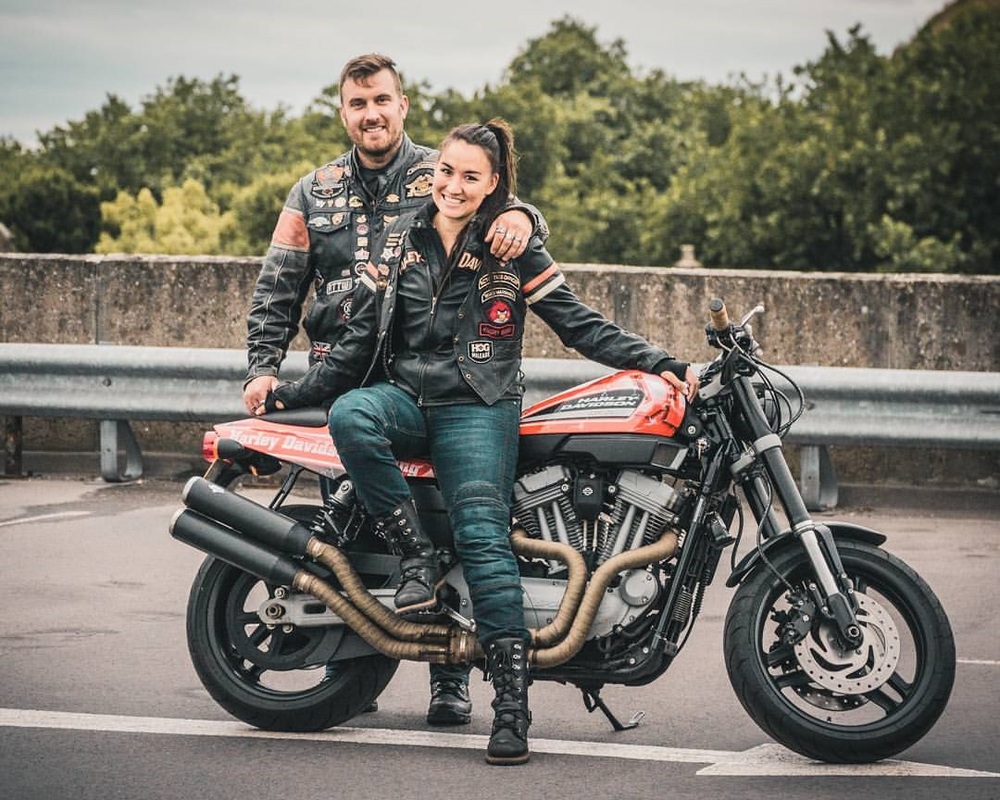 “He knew that Matt had always wanted a Harley, and he had a Dyna® that he wanted to go to a good home, so we ended up selling Matt’s Yamaha to put some money towards it. We bought the Dyna and Matt decided that was it – he’d never have any other brand of bike.”

Vicki’s life changed dramatically in 2014 when her horse fell ill and had to be put down. She says: “It was devastating. Everyone says to me it was pivotal in who I am now.” Her father-in-law, who had a small collection of motorcycles, saw Vicki’s grief and stepped in. She says: “He said: ‘If you ever decide to get your licence, I’ll gift you this Honda.’ It was practically the same age as me, but I thought why not? The thought was exciting and terrifying, all at the same time.” 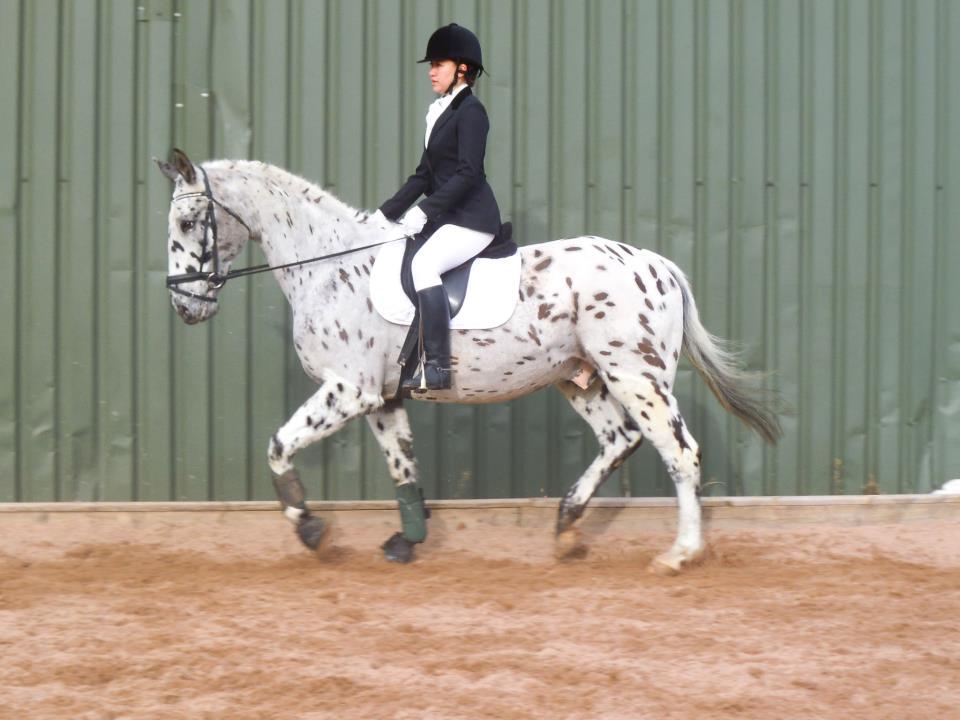 Though Vicki had enjoyed riding pillion with Matt for five years, she had never considered having her own bike. But gaining her licence was therapeutic, and she found her horse riding skills gave her an advantage. Vicki says: “I didn’t have as much fear as I thought I would, as I saw riding from the perspective of a horse rider – a motorcycle’s movements are more predictable than those of a horse, after all.”

By September 2014, Vicki was one week away from taking her final test when Matt asked if she wanted to have a look around their local dealership, Robin Hood Harley-Davidson®. She recalls: “We walked into the dealership and I couldn’t believe my eyes when a gorgeous XR1200 with custom paintwork was sitting in the showroom. I rushed over, only to have Matt point out that the bike had a huge ‘Sorry, this bike is sold’ sign hanging from its handlebars – I was gutted!”

When Matt dropped her back at home, he said he had to pick something up from his office. Soon after, Vicki heard a roar and saw the XR1200 approaching. 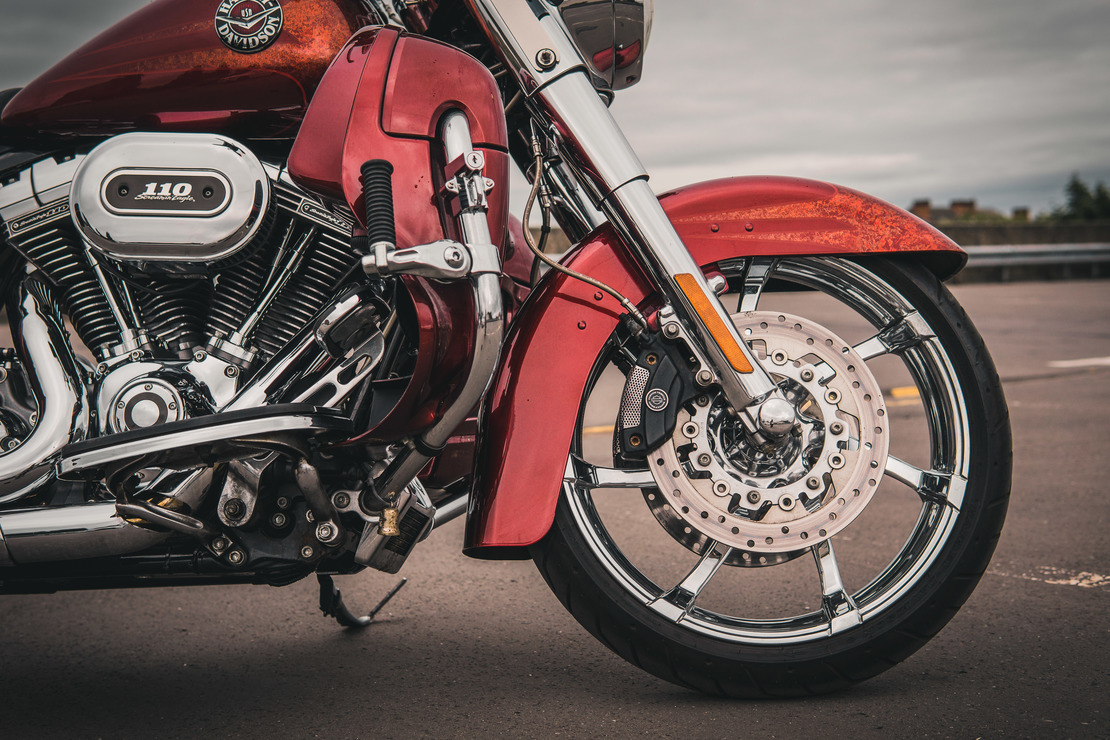 She says: “I didn’t recognise the helmet of the rider, but then it pulled on to our driveway. Off came the helmet and it was Matt. I rushed outside, completely confused. But he simply said: ‘Do you remember how the salesman said a guy came in earlier and bought the XR for his wife? Well – that guy was me!’ I burst into tears.”

Although the start of Vicki’s Harley® love affair sounds worthy of a light-hearted rom-com, the journey forward has involved taking a very practical, hands-on role in the couple’s local Sherwood Chapter, a group she describes as “awesome”.

Vicki says: “After the first year I decided I wanted to join the committee. If I am into something and have ideas, I won’t sit and moan, I’ll get stuck in if I think I can help. So I became Activities Officer.” 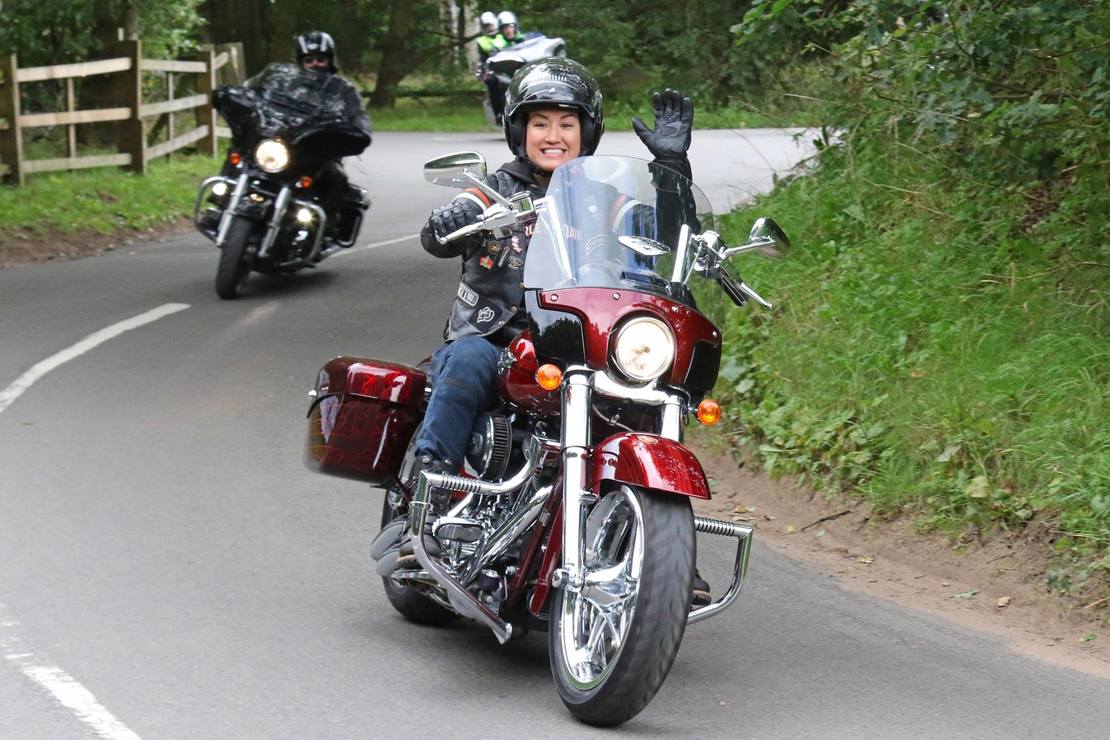 It wasn’t long before Vicki took on the responsibilities of a guiding role in the chapter’s travel expeditions. She says: “Matt and I became Road Captains, and currently I’m our chapter’s only female Road Captain.”

And her plans soon literally swept members off their feet: “We both became Road Captains so we could take a big group of us to Wales, where I had the chapter go down a big zip line called ‘Zip World Titan’ in Europe’s largest ‘zip zone’ in Snowdonia National Park.”

Although her Activities Officer role underlines the fact that she enjoys a good time, taking the lead means much more to her than days out: “I know Gill ‘Moggy’ Mogg is the only female Chapter Director in the UK, and I would love to one day be able to say I was gunning for something like that. I always want to big-up female riders.” 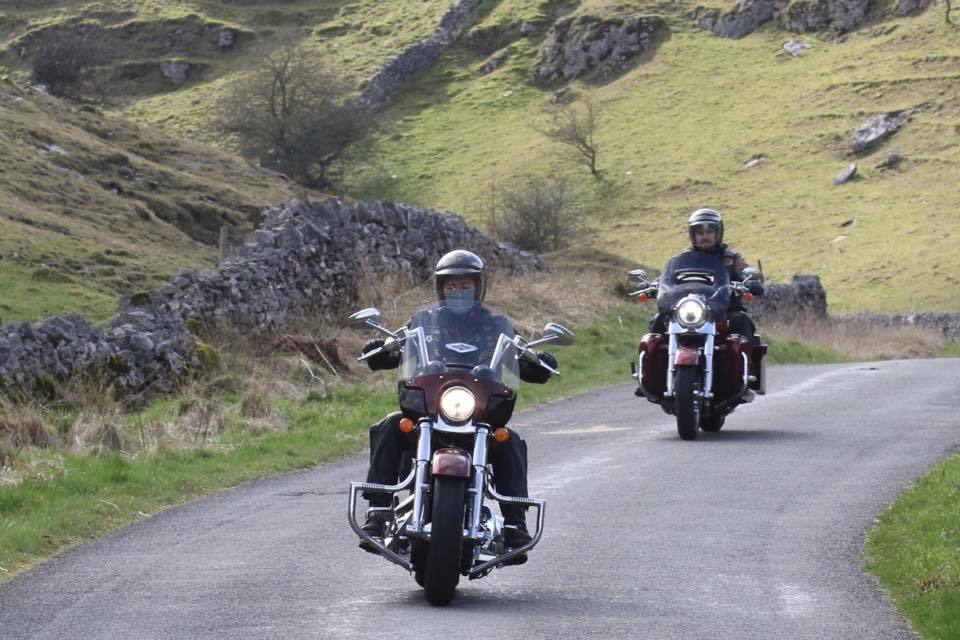 As part of that, Vicki wants to offer women in her community the same opportunity to get on their first Harley that she had. She says: “I did a Ladies’ Day, where I asked any female friend, relative or wife if they’d like a go at learning to ride and hooked up with one of our local riding schools, who put it on for free. The women involved raised money for the Lincs & Notts Air Ambulance, which is our sponsored chapter charity. We raised more than £500.”

Alongside her involvement in H.O.G.® community activities, Vicki is equally hands-on when it comes to customising her own motorcycles. She says: “I like to get pretty technical and I like to customise them. I like people to know mine’s not off the shelf.” 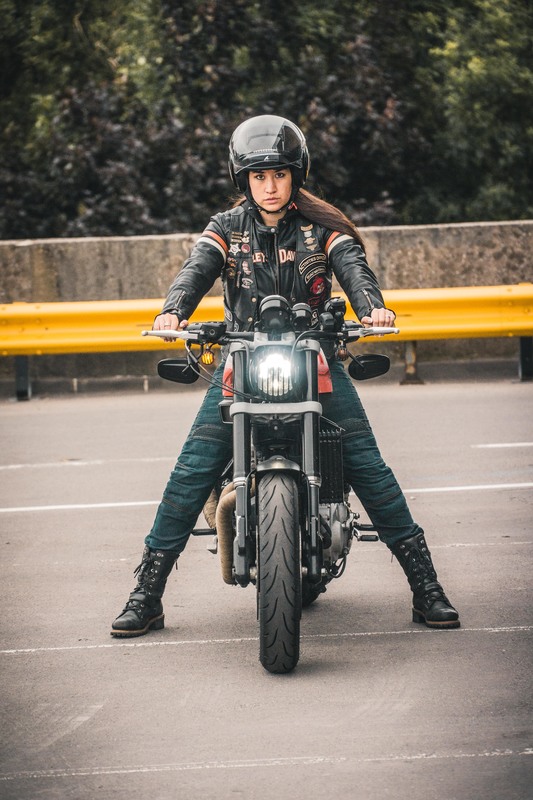 After her 30th birthday this year, she decided to buy herself a birthday present, adding a CVO™ Softail® convertible to her collection and naming her Connie. “I have a nickname in my chapter – I’m Angry Bird because I’m the noisiest. Both of my bikes are ridiculously loud.”

Her XR1200, named Rex, was her first project: “I am not mechanically trained or skilled so the Robin Hood dealership technicians have done the main upgrades for me, including the Stage One conversion on both my bikes. But in terms of what I did, it was things like flipping my mirrors, changing my grips and making my headlight a Blackout Daymaker™.

“It was a way of learning about my bike, as I knew I wasn’t mechanically minded enough to rip the engine out and do it myself. It sounds like a bit of a non-technical approach, but that’s how I wanted to learn. So I changed the things I could change. To some people it might not sound like much, but for me it was my way of making my bike my own.”

Vicki says her horse riding days have made her the safe rider she is today, and that she has never seen a horse rider who has not become a great motorcycle rider. She explains: “The fear factor with horses is that they have a mind of their own. If your horse sees something you don’t, they will react to it. So it doesn’t matter how great a rider you are, it doesn’t matter how experienced you are, there’s always that element of uncertainty.”

In contrast, the rider is 100 per cent in control with a bike. Vicki adds: “You have to be the mind for yourself and the bike.”

Vicki’s message is clear: “For me, Harley is more than the bikes. We’re so passionate about the whole lifestyle, and I’d love it to be something that more people know about.” Keep your eyes peeled, and you might spot Vicki spreading the word on Harley-Davidson by heading out with the Sherwood Chapter on yet another superbly organised road trip… 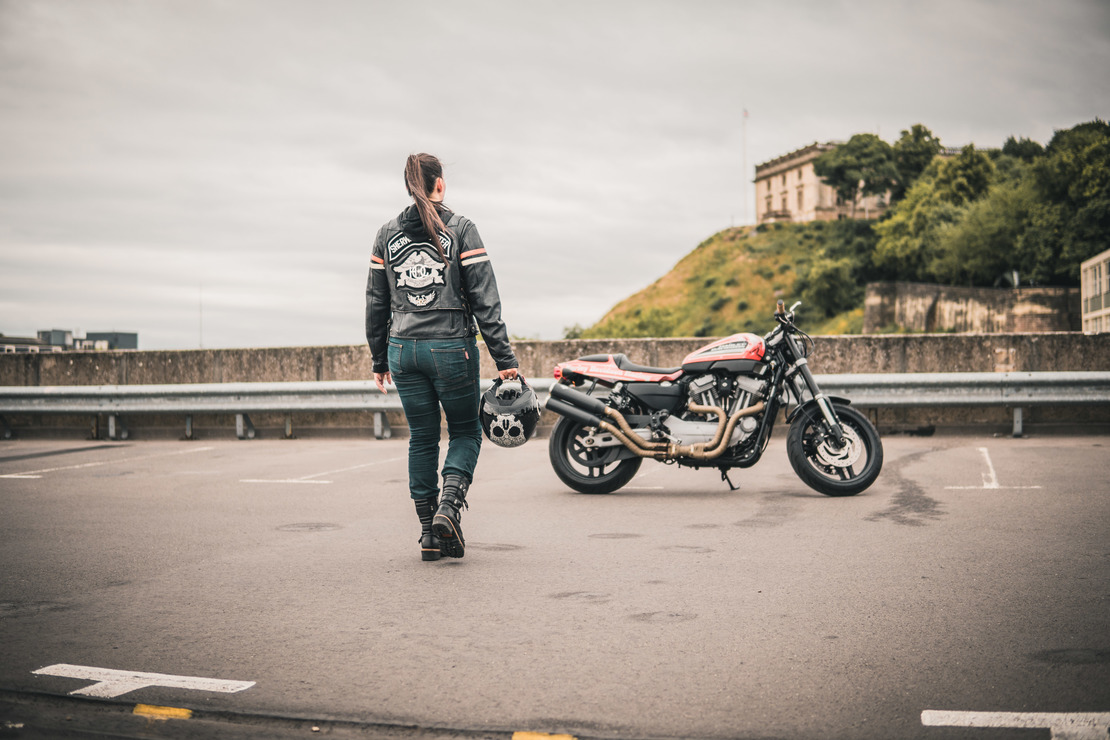