Once considered very different and separate pursuits, the worlds of motorcycling and skateboarding have grown closer together in recent years. The two cultures now stand side by side at exhibitions and shows such as Wheels & Waves, Born-Free and The Trip Out; and legendary names from the pioneering days of skateboarding – like Steve Caballero, Max Schaaf and Riley Hawk – are increasingly becoming known as much for their riding and bike building as they are for their skating tricks. 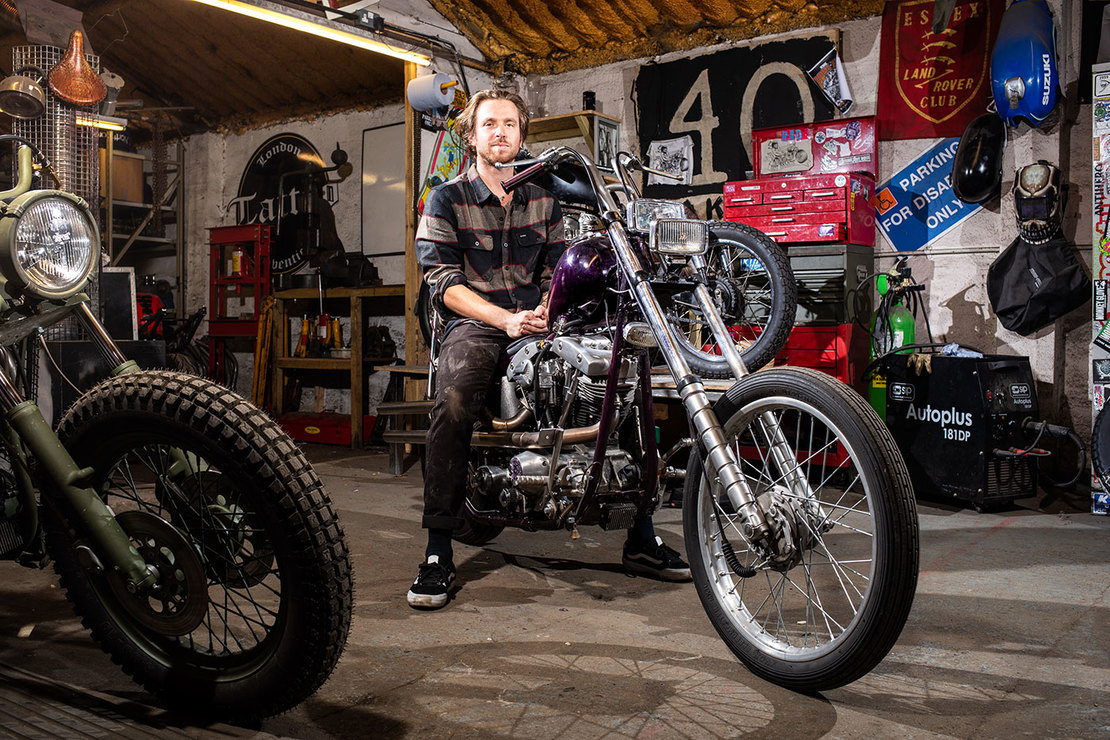 From its beginnings as a street subculture in the 1950s, skateboarding has crossed firmly into the mainstream. Skating stars like Tony Hawk have become household names, popular events like the X Games have raised its profile ever further, and now it is set to take a place at the biggest sporting showcase of all – the 2020 Tokyo Olympics.

A new kind of freedom
Scott ‘Horsey’ Walker operates in that sweet spot where riding and wrenching on Harley-Davidson® motorcycles intersects with the street culture of skateboarding. Scott, originally from Saffron Walden in Essex and now based out of Walthamstow in east London, is one example of the increasing number of skateboarders who have found a new expression of freedom in riding and building Harley-Davidson motorcycles.

Scott has been a prominent figure in UK skateboarding for years, honing his skills on the streets of Essex and in the skate parks of east London, before moving on to the global skateboarding circuit, working with skateboard brands and even designing his own range of boards. Now working for House of Vans in London, Scott has linked his skateboarding skills with a passion for riding – and building – classic Harley® motorcycles. 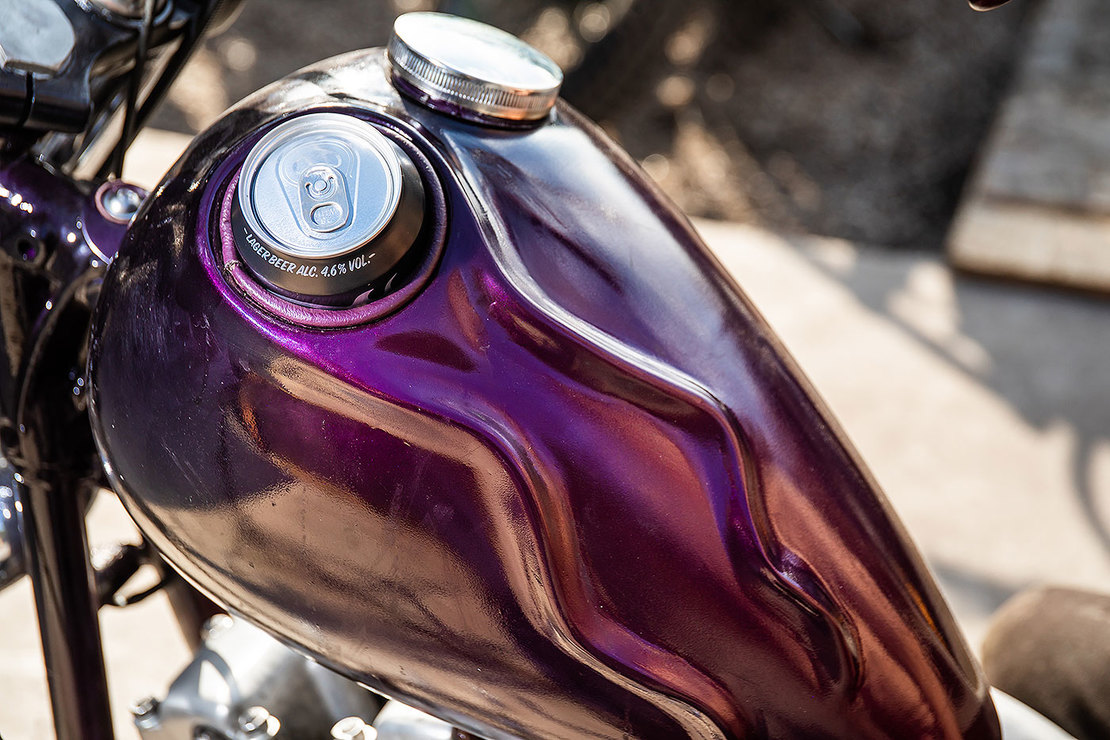 Scott’s love of motorcycling began with a utilitarian moped, when he found that a bike was the simplest way of getting through the London traffic while carrying a skateboard. A series of bigger bikes followed, until the opportunity to buy an old Evo Sportster® that had been sitting neglected in a Bethnal Green garden for years ignited a love for Harleys that has flourished ever since.

“I loved the Sportster, but ever since I can recall, I’ve wanted a Shovelhead,” says Scott. “Eventually, the opportunity came to buy a ’79 Shovel from a guy in Liverpool, so I sold some old skateboards and parts to raise the funds and bought it. I rode it for about twenty minutes before I started taking it apart to customise it.”

Custom king
Scott’s Shovel is now in the configuration he had in his mind when he bought it. Stripped back and shorn of any parts deemed unnecessary, the bike has the front end from an Ironhead Sportster, a front drum back from a generic Japanese bike and a weld-on hardtail. Inevitably, a high sissy bar is an essential part of the build – Scott straps his skateboard to it when riding to skate parks, exhibitions and meet-ups with friends in the Hot Dawgs, a loose-knit skating and riding group he was instrumental in forming.

The Hot Dawgs are an eclectic mix of riders and skaters, united by their shared interest in bike building and customisation. Central to operations is the ‘Pork Chop Shop’, the Essex workshop of member Barry ‘Baz’ Kay of Skate Interiors. This is where much of the group’s customisation work takes place – when they are not diverted by the Hot Dawgs’ in-house skate ramp, a constant temptation. 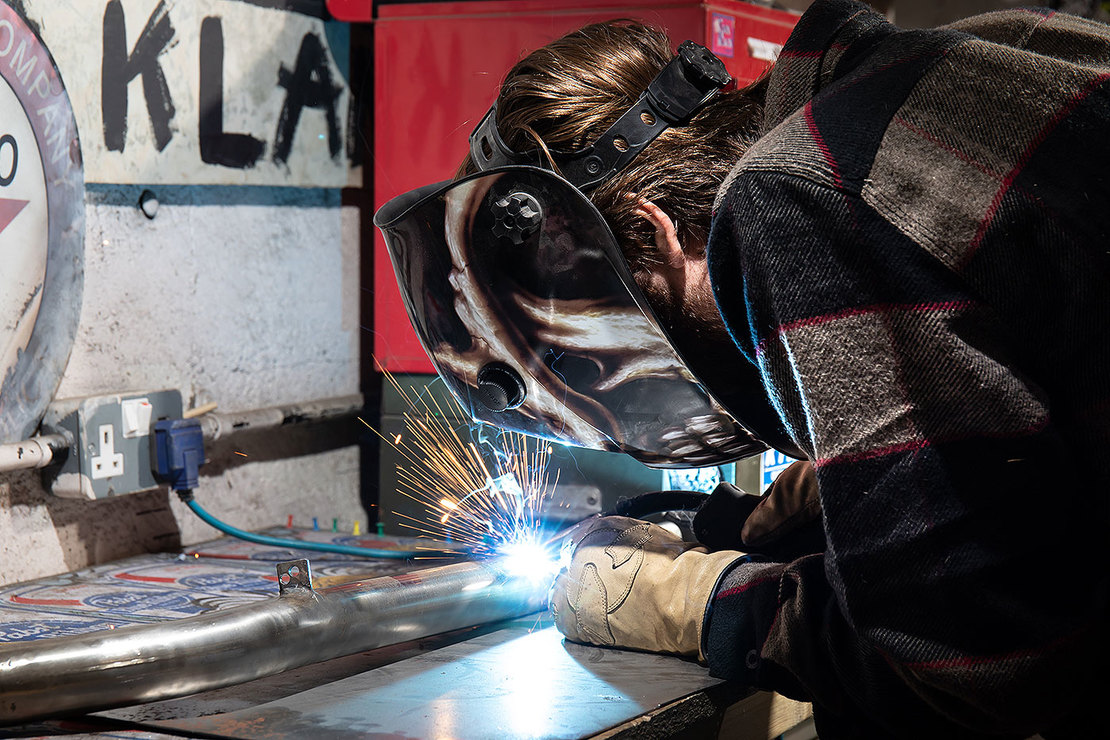 “I’ve always been interested in working with my hands, tinkering with machinery and stamping my own identity on whatever it is I’m working on,” explains Scott. “There’s some skilled guys in the group as well – Baz helped with a lot of the work on the Shovel, including the front end and seat. Originally it had a hand shift and no front brake, but after riding it into London traffic like that, I decided it needed some work…”

Paintwork on the Shovel is a street-style rattle-can approach, fading from near-black at the headstock through purple, and graduating to white at the rear wheel spindle. Features like the Linkert ‘bird deflector’ air cleaner, narrow bars and hardtail nod to the ’70s street style of California biking culture. This winter has seen a more extensive rebuild to improve the lighting and braking, shorten the straight-through pipes and add items like a kill switch to make riding more practical, without detracting from the stripped-back street style.

Best in show
Scott’s love of old bikes in general, and Harleys in particular, has led to his work with street footwear brand Vans shifting from judging skate competitions to event management, including organising the first Assembly Motorcycle Show in 2017. Based at House of Vans HQ in London, the exhibition showcased chopper culture to a primarily skating crowd, and was an instant success. Since then, the event has grown exponentially, with this year’s version attracting support from names like Brat Style and Vintage Dreams from the US, Belgium’s Chopper Barn and UK brands including DicE magazine, The Great Frog and Baron’s Speed Shop. Such is the show’s popularity that it now threatens to outgrow its original venue in Lambeth. 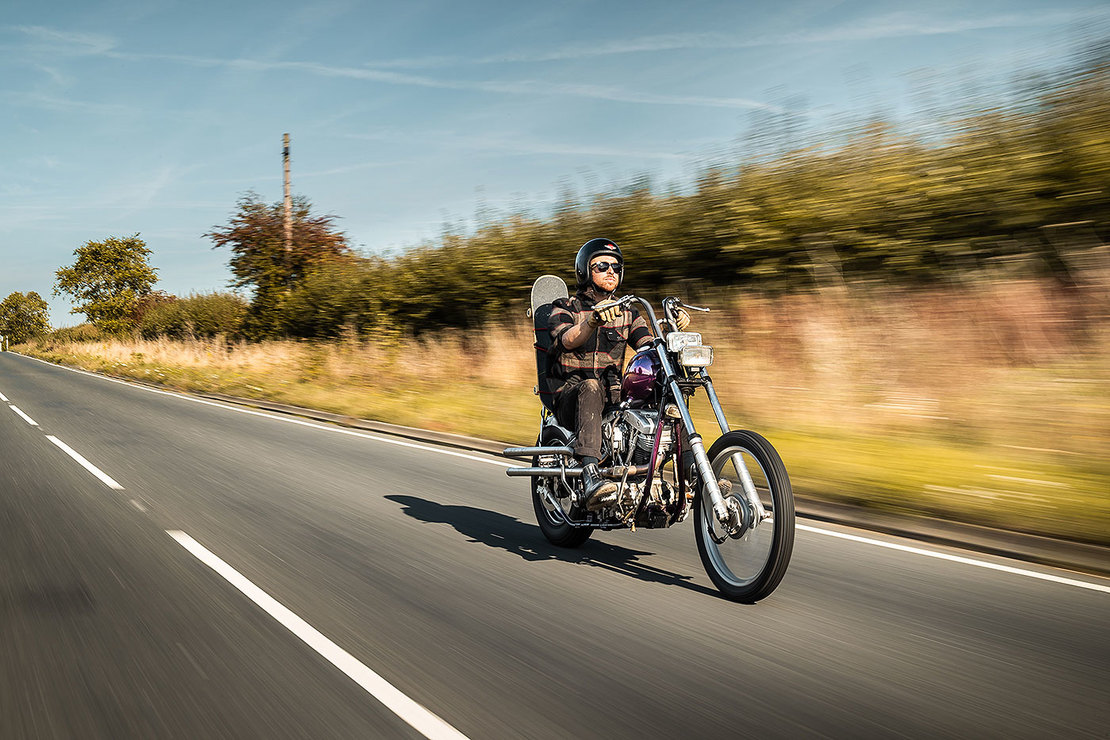 New discoveries
Scott’s growing interest in the Harley® brand has also taken him further afield, leading him to attend European Bike Week for the first time in 2018. His thoughts? “Amazing. Mental. Immense! It was a whole other crowd for me, but everyone was so nice to each other and to me, and so respectful – the passion they have for their bikes is so similar to what you find in the skateboarding world. Skateboarding and motorcycling have the same kind of energy to them, and I’m noticing lots more skaters on bikes these days, so the two cultures are moving closer together.

“I took the opportunity to ride some of the new bikes while I was there, particularly the Breakout® and the Fat Bob®. Both of them were incredible, particularly the Fat Bob, which is very much my style of motorcycle. The idea of having a newer bike with modern brakes and suspension was so far from my experiences on the Shovel! I’d love to have a new Harley as well as the Shovel, but that might need to wait until I’ve finished renovating the house I’ve just bought!”

As skateboarding and motorcycle cultures come to influence each other more and more, an overlap in terms of design seems inevitable. Indeed, Harley-Davidson® designers looked to skate culture as part of their inspiration when designing the Sportster® 48, tapping into the trend towards raw and stripped down elements as part of the design aesthetic.