The showroom at Edinburgh Harley-Davidson® is an impressive spectacle. An extensive amount of floor space is home to numerous H-D® motorcycles – including some enormous CVO™ creations – and the odd photograph of the Dunedin H.O.G.® Chapter.

But I’m not here to while away the hours browsing my dream purchase, as I’m due to collect the Glide® Special that is tasked with tackling 500 or so miles of the finest Scottish tarmac in just two days.

The 1,745cc and 376kg of pure American muscle is a natural choice for such an endeavour, with plentiful room in the rear panniers for a traveller’s kit, a powerful 50-watt sound system to provide the soundtrack and a satellite navigation system to keep the big machine on course.

However, the plan is to use the latter sparingly, as this trip isn’t about the destination, it is about the journey.

In search of solitude

Rewind a month and the idea behind this trip was made almost entirely on a whim. It followed a cursory glance at a large pile of unopened letters, a bulging inbox and a jam-packed diary. It could all wait. 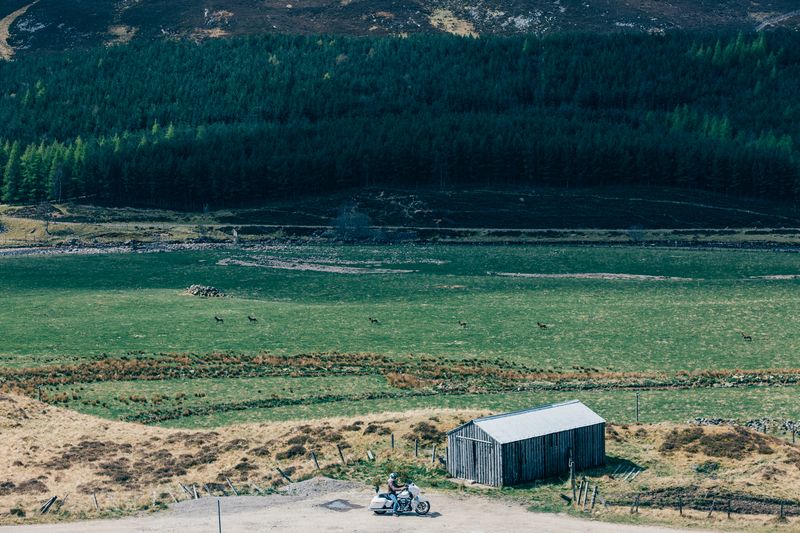 It is common knowledge that is home to some of the finest riding roads in Europe but it is the Atlantic 500 route, which covers the of the country, that tends to receive the most column inches.

Instead, the desire to get away from it all led to virtual pins being dropped around Edinburgh, Aviemore, Inverness, Elgin, Fraserburgh, Aberdeen and Perth. Satellite imagery was pored over, and a few slack-jawed seconds spent glancing at the sealed the fate of this road trip.

It would be one man, a motorcycle and endless miles of ribboning tarmac – the perfect tonic to any stress-induced headache.

From the big city to big country

The journey out of is taxing. The Street Glide does feel heavy to a newcomer, especially with the additional bulk of luggage placed in the rear panniers. Navigating the various traffic lights and one-way systems to the A1 takes time and patience, but I have plenty of the former. 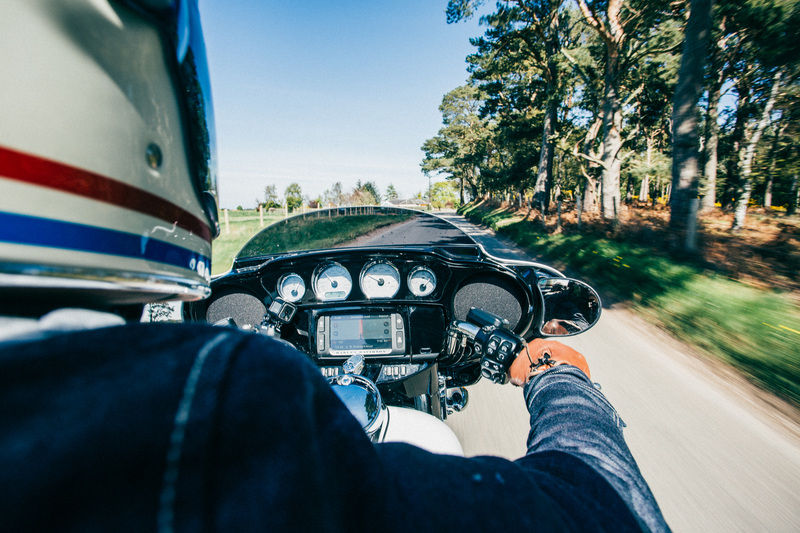 Thankfully, it is not long before the is in sight and I’m able to leave the hustle and bustle behind. My vague trajectory inches me towards the , complete with its epic vistas and the promise of open roads. Once off the M90 I hit the gorgeous A90, a road that skirts the national park but also does its own impression of the American Midwest, with tree-lined roads and stunning views out across lochs and lakes.

But the Street Glide is eager to peel off the route and make a beeline for Braemar, where the A93 runs through Crathie and the brilliantly titled before gripping the edge of Ben Macdui and spitting the bike and its rider out on the other side of the Cairngorms.

The road trip is only a few hours young, and the landscape has already knocked me for six on numerous occasions.

Perfectly smooth roads snake their way along the base of mountains, their highest peaks still capped with snow, while the distinctly beige foliage provides a stark contrast to the iridium blue sky – a rarity at this time of year.

The huge engine thumps away beneath me, the fresh air rushes up past the chin guard of my helmet, and the road carves this way and that, requiring concentration and restraint to ensure senses aren’t overloaded.

Hours pass and the road continues to deliver, but the initial pressure of piloting such a large machine across such demanding asphalt has dissipated. Bends are now linked in an almost hypnotic state, the bike leaning beautifully, tucking in and throttling out of the other side with little or no use of those huge Brembo brakes.

It is not until a long straight offers some respite that I snap out of the trance and realise that I haven’t seen another vehicle for around 20 miles.

A day of solid riding requires a good night’s sleep and I crunch across the gravel of the the beautiful Loch Ness Country House Hotel’s driveway, which is located on the outskirts of Inverness, just as the sun begins to dip behind the grand Georgian building. Sleep comes easy after one, two (or was that three?) drams of Glen Ord single malt, but the following day requires a serious dose of sea air to clear a thick head.

One full Scottish breakfast later and the Street Glide Special is pointed east towards the A96 and the promise of a natural hangover cure. The scenery has changed dramatically from yesterday’s epic mountain vistas, as the gently undulating roads narrow and become lined with sandy forests. Sighting corners can be tricky, but the breaks in the foliage give occasional views of the wild .

The Street Glide® hammers through Lossiemouth just as two jets take off from the local RAF base. The noise of the heavy 107-cubic-inch V-twin engine is temporarily drowned out by much larger powerplants.

There is something strangely hypnotic about the guttural chug of a Harley® V-twin that just seems to perfectly suit this journey. It makes the miles disappear. Small towns are traversed, but the local roads nearly always lead back to the coast – and that’s no bad thing. There’s hardly another vehicle in sight most of the time, and the fresh sea air feels good on the face with the visor lifted.

A home from home

Lochs, lakes, forests and peaks pass in quick succession, the breathtaking scenery apparently stuck on repeat in this part of the world. 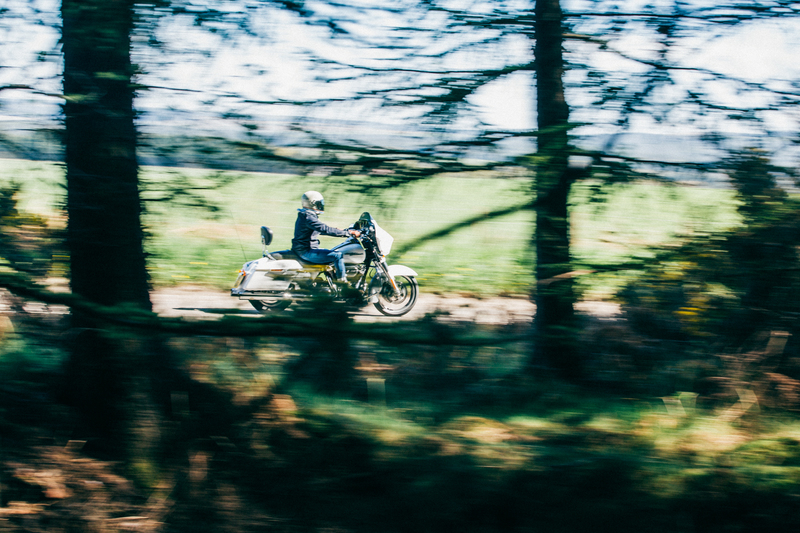 The Harley-Davidson® thunders onwards, throttle set to cruise control and the revised suspension settings in this 2017 model soaking up the majority of imperfections in the road. A cosseting, low-set seat hugs the backside and the large front screen does a good job of reducing buffeting.

It is here – with doing its best impression of – where the Glide really feels at home. The smooth roads and stunning scenery are tackled with ease, the large footplates and swept-back bars offering a comfortable position from which to take it all in. There’s enough torque produced by the engine to be lazy with the gearing; I simply tip the huge frame into a rolling corner and throttle out, the inertia enough to pull the hulking brute through the bend.

But reality quickly sets in. The traffic steadily increases the closer the bike gets to , and, eventually, Edinburgh – where I’m due to rest a weary body before an early flight back home. 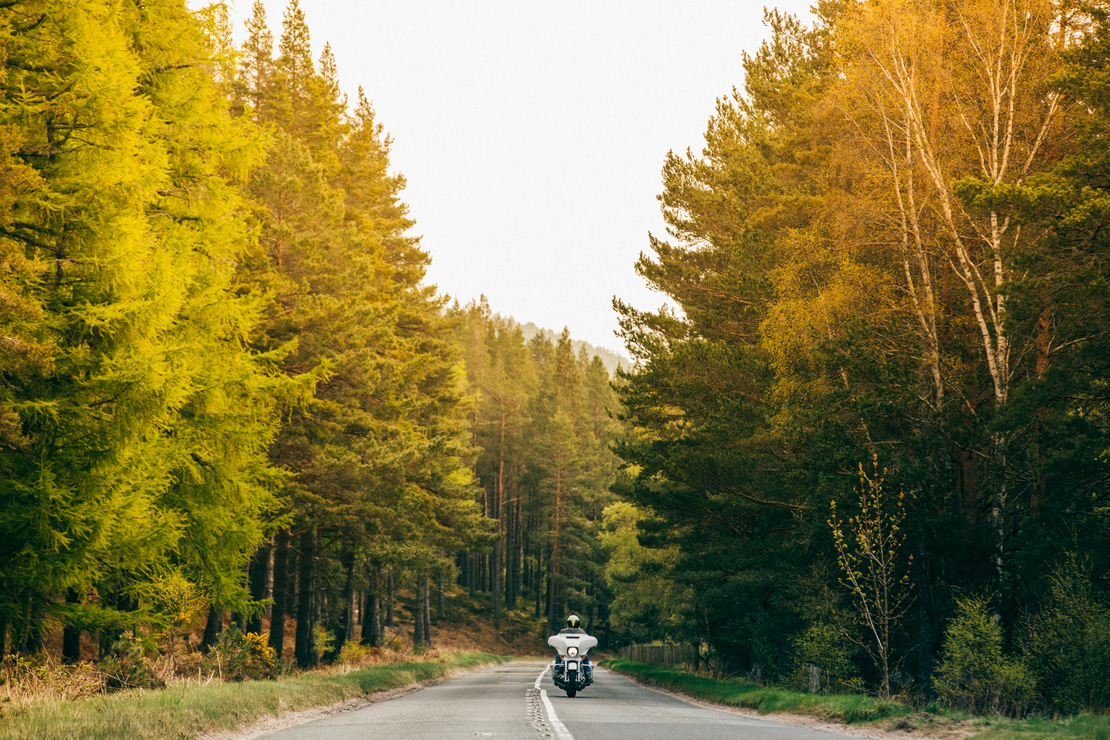 In this quest for solitude, the Street Glide managed to nearly always find a stretch of road with few souls around. And when it did arrive at an empty, meandering stretch of blacktop, it delivered on its promise.

Nothing empties the mind quite like a Harley-Davidson motorcycle, and few places on earth can compete with the natural beauty of the Scottish Highlands. Like the aftermath of any good adventure, the frames of recent experiences play on repeat in my mind as I land back to reality with a bump.

The letters, inbox and diary can wait. Planning begins for the next exploit now.