Then get up and go! I guarantee you’ll wonder why you didn’t do it sooner. The world is filled with seriously spectacular roads and for me in the , there are stunning views waiting a short hop across the .

Plunge into the and you’ll lose count of how many times you say ‘wow’ as mountain passes, aggressive climbs and plunging descents unfurl round every turn. I’ve seen the Alpine peaks countless times as a snowboarder, but I’ve been naïve to their wonders in summer. Picture rugged, untouched terrain as far as the eye can see, cyan lakes, raging waterfalls and powerful rivers, vast skyscapes and endless switchbacks. It’s an addictive riding heaven. 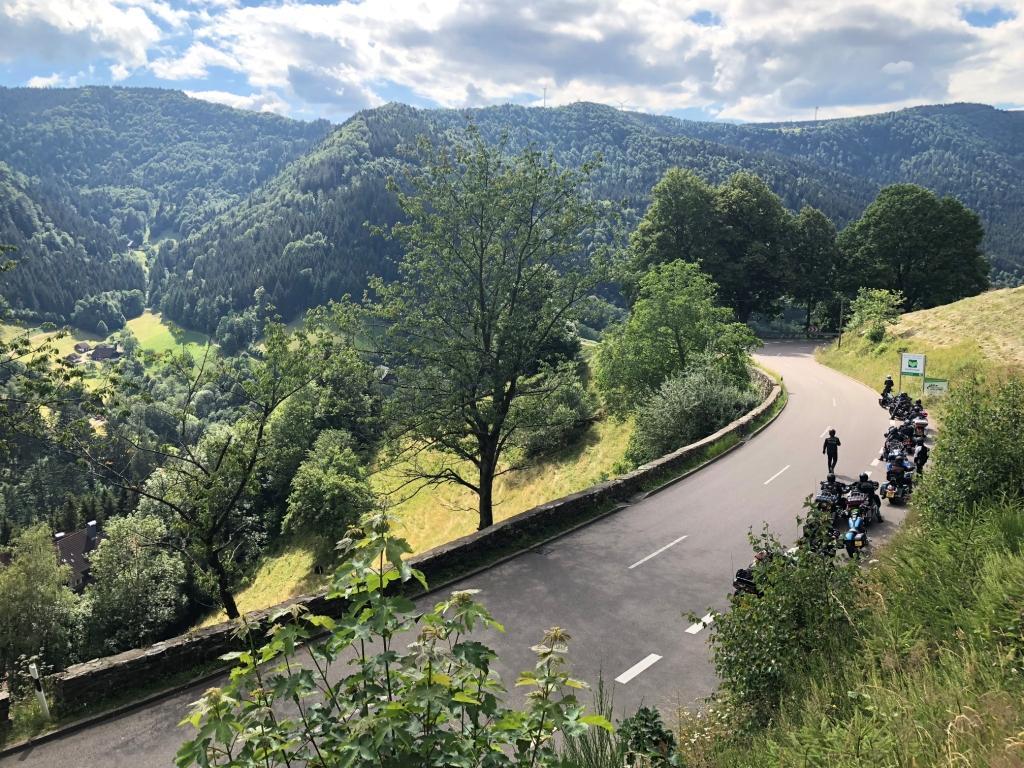 So how did I get here? A honeymoon road trip on Softail® bikes, a Street Bob® wedding anniversary ride-out and a serious road traffic accident in 2014 have all led to me being unable to imagine life without my Harley-Davidson. Now I’m physically unable to participate in the sports that once filled my life, it’s my route to exploring the countryside around home. Without it, I don’t know how I would have kept smiling through the dark days.

And now I was heading beyond the , crossing via the Channel Tunnel at Folkestone, then throttling across , and along the stunning B500, on endless ribbons of road gift-wrapping stunning scenery – the ultimate aperitif to a tarmac glutton’s main course: the mountain passes of , and . 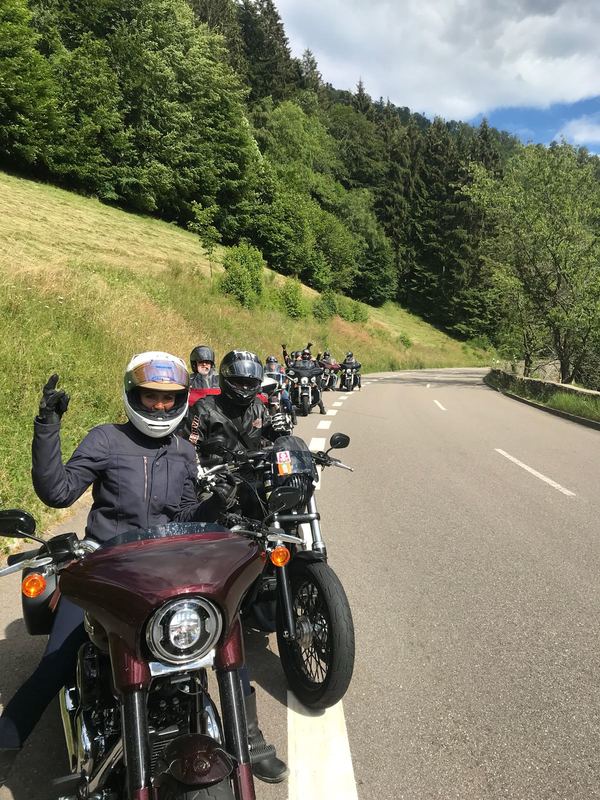 When you’re undertaking a 2,700-mile-plus road trip, it’s easy to stress. Have I picked the best route? Will the roads be as good as I hope? Can I handle the distances between stops? But I hadn’t a worry or question in my mind. I had offloaded all that by booking a guided tour with Tour1, allowing us to concentrate on the ride of our lives instead.

The Tour1 guys recce everything, researching the best routes, testing hotels and picking the ultimate roads, restaurants and coffee stops to make your ride as perfect as possible. They take the stress out of contingency management too. If your Eurotunnel is delayed by four hours (yes, it happened), they know how to get you back on time with the group. Landslide closes a mountain pass? (Yes, this happened too.) Relax with a coffee while they plot an equally impressive alternative route. The only variable no one can plan for is the weather, which in the can alter between passes, let alone days. This meticulous organisation combined with staying in three- and four-star hotels, meant the tour was great value for money. 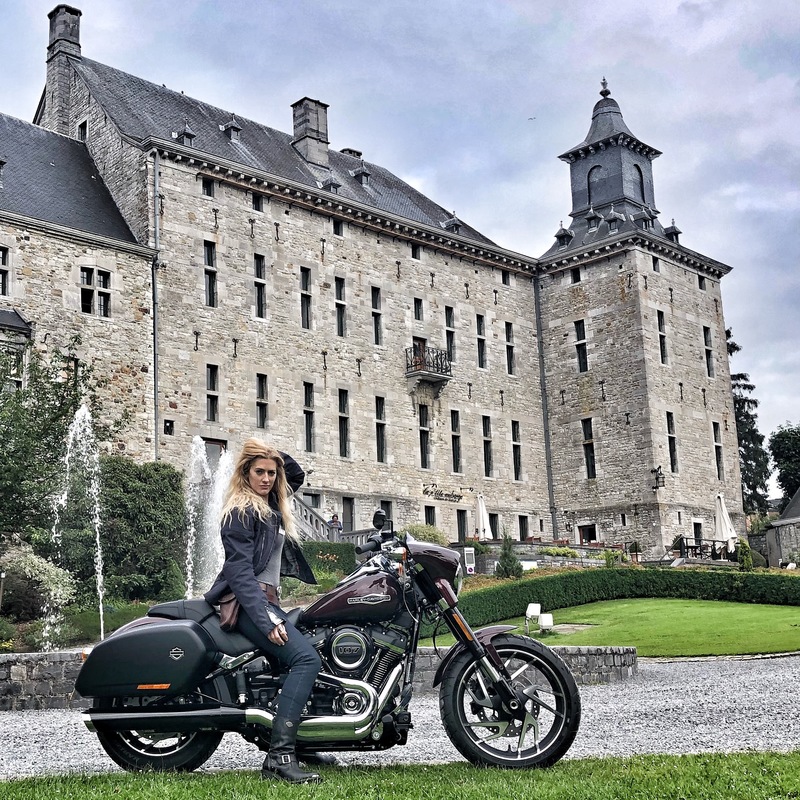 Take a beautiful road in the , full of sweeping turns and breathtaking scenery, and before you’ve settled into the flow it runs out. In the , you can have this all day, every day. Pick the right tour route and you’ll also be immersed in some technical and challenging riding. Take the , the third highest in the . At 9,045 feet, it offers 75 hair-raising hairpins and stomach-lurching views. The Passo di Gavia, listed as one of the world’s most dangerous roads, is a single-track ascent featuring oncoming cars, bikes and bicycles, potholes, gravel and rock slides. For some it’s the ultimate challenge, for others a risk too far – but no one forces you to tackle it. Then there’s ’s , made both challenging and breathtaking by cobblestoned hairpin bends. Initially, I wobbled like a newborn Bambi, but after stringing a few switchbacks together, I realised how much grip was available and it became a tour highlight.

There are many more fabulous passes that haven’t achieved such reputations and the roads connecting them are often gorgeous valley sweepers, ebbing and flowing through towns and lowlands, providing a welcome breather before the next ascent. I had sore abs on some days from leaning my 320kg Sport Glide over around corner after corner on so many passes.

There’s confidence and safety in numbers. Our 15-strong gang of Harley-Davidson motorcycles was hard for drivers to ignore and our range of experience and skills meant we had a solution for every eventuality. You’ll also learn from such a group. At a minimum, the tour leader will be an advanced rider capable of teaching you a few tricks. At best, you’ll rub shoulders with some awesome riders. A Kiwi guy became my favourite back wheel to follow. I learned from his lines and took guidance from his speed: an incredible way to improve my riding. Without such an experienced lead, I wouldn’t have developed to such a level, and the Stelvio in particular was a real education… 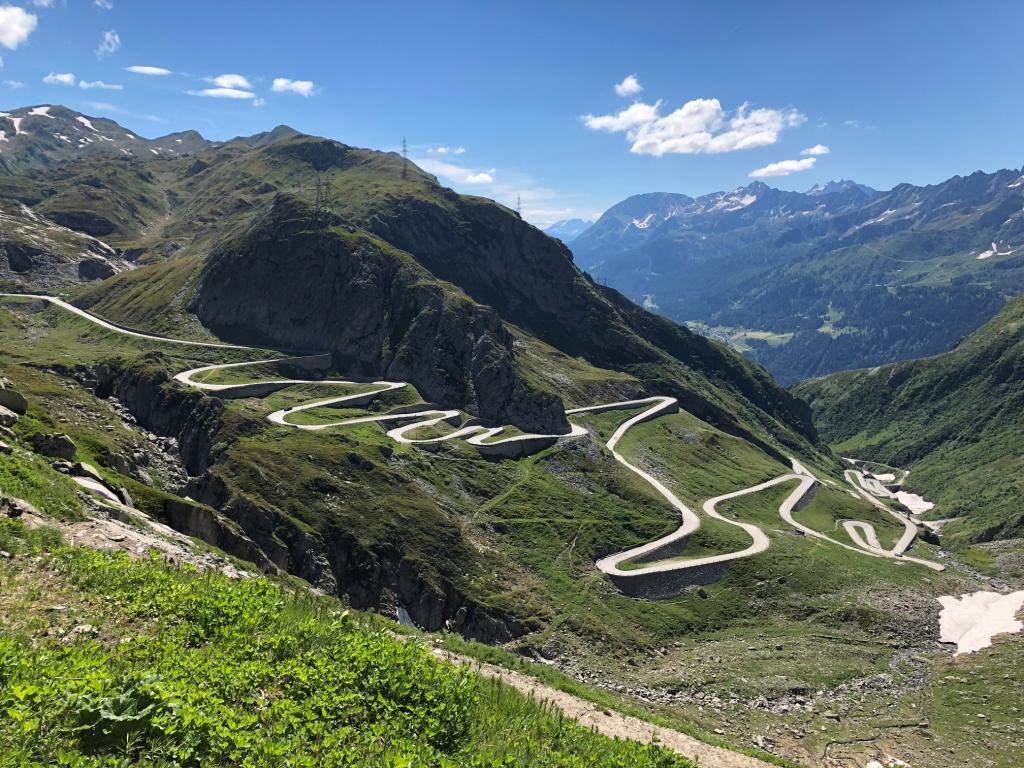 We click down into first, hands gripping the bars. We’re off. The potato-potato of our V-twins kicks in as we accelerate through the first hairpin. Dab on the back brake entering corner two, heads looking up. Bend three, weight leaning over, bends four, six, nine… pegs kissing the ground on 10, rubber gripping the tarmac… 13… 17… 21… the throttle whips open, revs flying as we climb… 25… 27… gears changing, up and down in quick succession… 31… the wind whistling past… 34, 35… riding hard, gaining speed on the straights. Left turn, right turn, whipping back and forth across the rugged terrain. Coming out of 48, the summit is in sight.

We pull over. Time slows as I take in the views, the jagged mountains. My body is flooded with something I’ve never experienced before. I’m throbbing with adrenaline. I’ve never felt so alive! 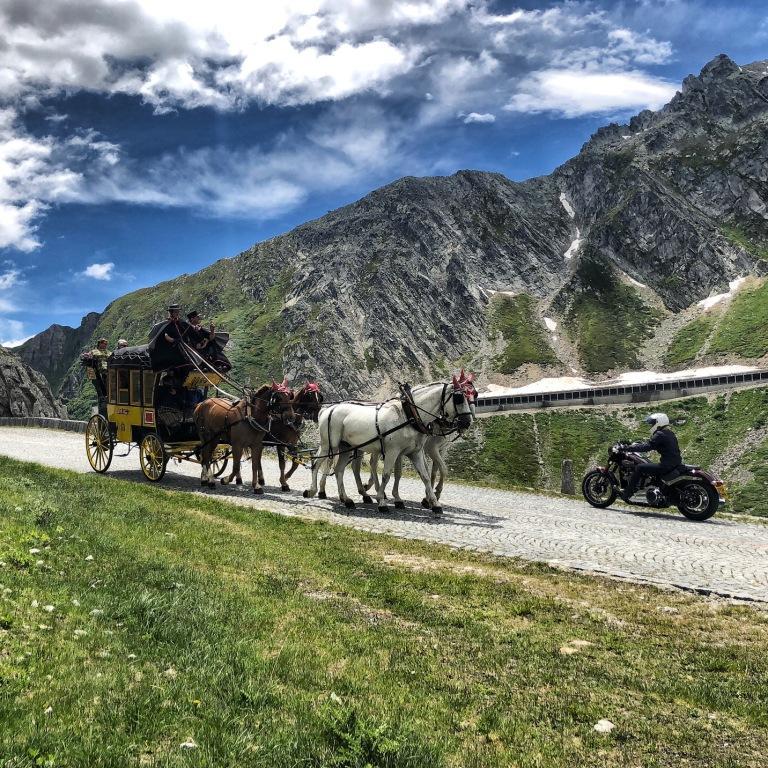 How do you keep 15 bikes together in unknown terrain with the lead man on navigation duties? The buddy system kept us linked together while allowing us to ride to our own abilities, fast riders at the front. Each rider was responsible for making sure their ‘buddy’ – the rider behind – knew where to go at any turn-off: ride the straights, wait at junctions. Doing this mileage in a group was something special, as were the looks on locals’ faces as we thundered through. We even had a nursing home out on the pavement when we stopped nearby. Judging by their smiles, they’ll have talked about us for weeks.

The tour passes through nine countries and the transformation of cultures as you cross each border adds a subtly different flavour to each leg. From Swiss mountain lodges to ’s cowbells and lederhosen, and seemingly infinite local beers after a day’s riding, travelling by motorcycle brings you closer to every country you visit.

The engineering of the roads is incredible: high-altitude passes with sheer drop-offs and no guardrails, and totally exposed hairpins. The occasional rock slide, herd of cattle or throng of Lycra-clad cyclists all add to the road surface challenges. Riding in a place free of the health and safety police is liberating, and a sensory overload too. You try to drink in the scenery as the potential for disaster spikes your adrenaline, while also ensuring you don’t fixate on the drops. It’s a riding nirvana that leaves you feeling you’re living on the edge. Literally. 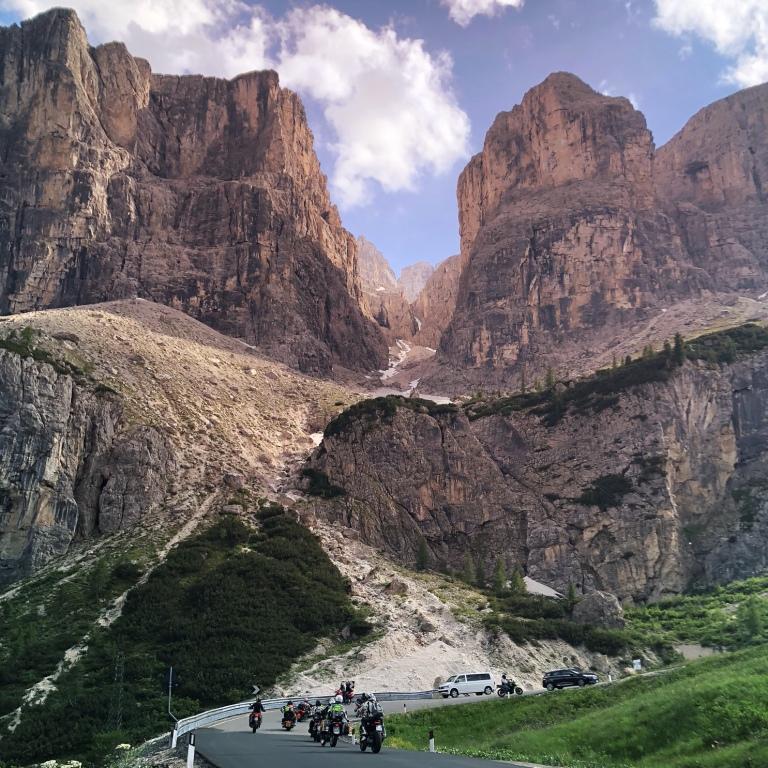 Something I hadn’t anticipated was riders in Lycra, not leathers. The attracts a huge volume of cyclists and with their lightweight set-up and crazy grip they can hammer it down mountains, cornering at mind-blowing speed. I followed a clearly very experienced cyclist for a good mile, with the short straights between corners, plus oncoming traffic, making it little too tight to squeeze past. It’s nuts to think I had a 1,745cc engine and he had only his legs.

I smashed him on the up, though, and some of the ups were huge! For guaranteed pothole-free riding, where you can power around any corner with confidence in the rubber to road traction, head to and .

As a relatively new biker, only really taking up two wheels after my accident, the were a huge learning curve. Yet it didn’t take long to get the feel of the riding, pegs down, grinning from ear to ear. Now, having completed my 2,700-mile trip, I feel more confident and more secure in my everyday riding than ever before.